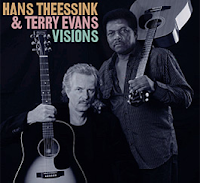 This release features two veteran musicians on a collection of classic tunes and a handful of originals. They share the vocal leads and their guitars provide most of the musical accompaniment. Phil Bloch adds percussion on eight tracks while Richard Thompson adds his electric guitar on two songs.

Theessink (pronounced Tay-sink) has been playing the blues for more than 40 years across the European continent, establishing himself as a first-rate guitarist in the country blues style. His powerful baritone voice easily conveys the resignation and despair in the song lyrics, especially on “Dark End of the Street”.

Terry Evans used to sing back-up for Ry Cooder before starting his solo career. His supple voice can range from tenor to bass with the gritty edge of the best soul singers or the fervent passion of the lead singer in the gospel choir. Evans has a fluid guitar style that forms the center of many of the arrangements.

Tracks like “Going Back Home” and “Glory of Love” feature Theesink’s expert guitar picking and booming vocals that command attention. The duo turns in a refreshing version of “Talk to Your Daughter”, the two guitars propelling the track along. Evans tears into another warhorse, “Don’t Let the Green Grass Fool You”, his energetic vocal riding the steady rhythm from the guitars. Even better is the closing track, “Come to the River”, an Evan’s original. He takes listeners to church with a stirring performance that builds in intensity, urged on by Theessink’s backing vocal and acoustic slide guitar. “Let the Four Winds Blow” features Thompson’s lead guitar dancing around the vocal lines.

Visions is a superbly crafted project that allows the combined talent of Theessink and Evans to shine throughout the recording. Using the simple guitar & vocal format, they manage to inject life into every track, even the well-worn classics. Be sure to give this compelling gem a serious listen.
Posted by Crossroads Blues Society at 11:22 AM