Upside Down reviewed by David Stine 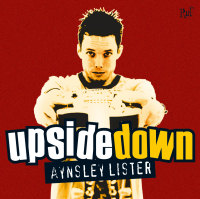 Somewhere on the way to his fourth CD, Aynsley Lister was misdiagnosed as a bluesman. Although the promo sheet that came with the CD mentions Aynsley’s cutting his teeth at 8 on his dad’s Freddie King and Eric Clapton records, I have to believe that he found his dad’s AC/DC, Black Sabbath, and Deep Purple records as well. Several listens to this CD revealed NO blues, no blues structure, no blues references and no bluesy playing. What I did hear were some near-country singing and some very heavy in-your-face guitars. The CD kicks off with the fast rocker “Find My Way Home.” Sure doesn’t sound like Clapton or Freddie King. “Getaway” slows things down ad bit with a guitar only intro, then it becomes a song that could have easily come out of modern-day Nashville. Don’t get me wrong, I enjoy some of modern-day Nashville’s artists, but what’s with all the genre jumping? Are the pop/rock and country field’s so overloaded that “Blues” is the last refuge of a young artist looking for a label? Anyway back to the CD: song three begins as a pleasant break from the barrage--a nearly acoustic ballad entitled “Always Tomorrow.” As the song builds, here comes the big guitar sound to add emotion and push it to the end. I should mention here that Lister’s songsmith is fine, and his playing is great, AND he has a pleasant enough voice, but blues fans will be disappointed in the lack of blues. Even more country leaning (to my ears) is song four, “Ice I’m Upon.” (Expect to see Lister wearing one of those folded up cowboy hats on his next CD, NOT a blues chapeau.) Aha! It’s the slight whine in Lister’s voice that I hear. Song five, “beautiful” IS an all acoustic ballad delivered without the country mannerisms, and it is my favorite of the disc. So much of the rest sounds like stuff I’ve heard too many times before. Song six is a standard fare arena rocker (see previous statement). At song seven, “With Me Tonight,” we hear a bit of the shuffle intro worked to death by SRV, and I guess, if I were a blues radio DJ, this is the tune I would pick to play, because it‘s soooooooooo Bonamassa-esque!. “Rain” is a quiet acoustic outing that begins with some fancy Jimmy Page-type open-tuned picking. This is another nice, listenable song. Lister begins “In The Morning” with some metal-bodied finger work that jumps, you guessed it, into a fast rocker. Sounds The title track “Upsidedown” is, hmmmmmmmmmmm, a Hip Shake-meets-metal riff on steroids sung (partially) through a harmonic mic (or control room mic) that rockers will love. Oops, here’s that SRV shuffle groove again for “Disorderly Me.” Still, I refuse to call this a blues CD. (I don’t consider Joe Bonamassa blues either, BTW.) Ted Nugent would love the final cut “Falling Down” because it’s a fast “Stranglehold” meets Fleetwood Mac’s “Fighting For Madge.”

Fans of big guitar sounding blues-like-country-like music might want to check out Upsidedown. Aynsley Lister does have talent and fire. If you like bands who have taken 70s British blues rock to the next level and some of the heavier Nashville acts, then this CD is probably for you. Old school guys like me, well. . . Who’s Next?
Posted by Crossroads Blues Society at 7:58 AM