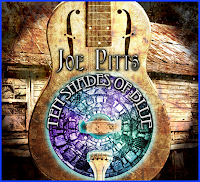 Ten Shades Of Blue
Joe Pitts
www.joepitts.com
Kijam records
10 tracks/44:25 min.
The lovely and “old timey” artwork on Joe Pitts’ CD is a bit deceiving considering what’s inside. One would believe that a photo of an old shack with a metal bodied guitar placed front and center would contain some acoustic blues. Other than song 10, a mediocre reading of Peter Green’s “The World Keeps On Turing” from Fleetwood Mac #1 (the only version the Fleetwood Mac band worth listening to, in my humble opinion), the rest is standard blues fare these days. Pitts, like so many others these days, cherry picks set list of ten songs--none originals--and delivers them in what my artist friend would describe as the new standard in standardness. Pitts sings from the throat in a limited range, his vocals leading only to a guitar solo enhanced with an overdrive pedal. Even with a pretty good backing band (Jimmy Lynn is a standout bassist) the songs are delivered as if they were being performed on the Lawrence Welk Show--for you old timers. Safe for white consumption is what I’m saying.  And not a white “blues” audience either. So sanitized, what’s the point?
The CD begins with “Breaking Up Somebody’s Home.“ Any version you’ve ever heard is probably better that this version. Song two didn’t convince me that that this is more than a going-through-the-paces CD. Muddy Water’s “Crosseyed Cat” is on it’s tenth life here. Walter Trout’s “Clouds On The Horizon” seems to be what Pitts is really all about and the rest of the songs become sort of luke warm hats off to the masters. Luther Allison would roll over in his grave to hear Pitts delivery of his “Pain In The Streets.“ Luther was all fire--here, the fire is doused. “Freedom From my Dreams” is a T-Bone Walkerish slow blues that goes on WAY to long and with TOO much OD on the guitar. Downright painful. This is may be the most predicable blues song I have ever heard: you can guess the next verse and hum the next note of the guitar solo. Shame on you Joe Pitts for taking up 7:27 of minutes our time! If you like Elmore James, you‘ll be saddened by Pitts reading of “I’m Worried.“ Again, no fire , no raw pushing the limit vocals. I as why pick songs by Elmore James, Albert Collins,  Luther Allison, or even Albert King if you’re just gonna play it safe? John Mayall’s Mick Taylor-era “Walking On Sunset” is over without a glimmer of quirky vocalist Mayall or trickster Taylor.
The Joe Pitts Band CD is like many others out there--it’s OK, not great; not terrible. The musicianship is fine; the vocals passable. I know I’ll get nailed for not being open and “modern,” but I have to call ‘em as I see ‘em.
Reviewed by David Stine
Posted by Crossroads Blues Society at 2:39 PM