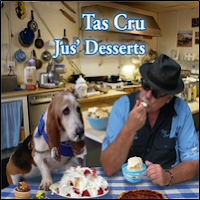 Jus’ Desserts
Tas Cru
Crustee Tee Records
www.tascru.com
11 tracks
Tas Cru is another of those artists that I’ve gone almost immediately from “who dat?” to “wow!” on.  A story telling singer and musician who warms you with his wit and charm and grabs you with his musical style, this Canadian artist is the real deal.  His vocals are real and warm and his guitar phrasing is well stated, with equal respect paid to the spaces between the notes as he pays to the notes themselves.  His harp work is also pretty damn good, too!
Cru wrote the entire album, 11 originals that comment on his life and society in general. The opener “Just Let it Happen” has a cajun sound that drips in its’ New Orleans gumbo of a groove.  He sings of letting things happen and letting them be to live a more satisfied life.  In “The Real Deal” he calls out all the blues wanna be’s who say they are working to keep the blues alive by trying too hard and not really feeling the blues and people who wave the blues flag but them push the blues back in the closet and push their more mainstream sound.  He slows it way down for the ballad “Time and Time” and shows us his soulful and sad side where he touchingly sings of his heart break.  “Glad to Be Alive” shows his style of electric guitar goodness to the max. In ”GPS Mama” Cru tells us how with technology he’s got a whole new problem with his woman since she can’t even find her way out of the shower; his dashboard tool  makes his backseat drivin’ woman even worse.  “Swing Doctor” shows us his boogie woogie side quite well.  He closes with “The Lucky Ones”, singing praises to his second chance in a life where he started as never being quite satisfied.
I’m sold on this guy- he has a set of really heart-felt lyrics and great tunes delivered in a great way.  Chip Lamson’s organs and keys are great. Andy Hearn is solid on drums as is Mike Lawrence on bass.  Jeremy Walz adds a tasteful slide on three cuts and plays lead on another pair of songs. A fine little band with a great little leader; Tas Cru is certainly “The Real Deal”!
Reviewed by Steve Jones
Posted by Crossroads Blues Society at 3:07 PM