Diamonds In The Dirt reviewed by David Stine 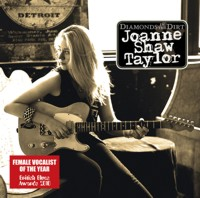 Diamonds In The Dirt
Joanne Shaw Taylor
Ruf Records
www.rufrecords.de
www.joanneshaw
taylor.com
10 tracks/45:21 min.
The first time I played this disc, I absolutely hated it.  The second time I played it, I liked it--a lot. What changed? My perception. The first time I was listening for the blues and didn’t hear any. The second time, I just listened. What I heard was pretty good 70s rock.   So let me begin by saying, I think Ruf is WAY off the mark trying to throw this poor girl into the blues arena. No way is she even close to this genre. Her older brothers must have worn out the Muddy Waters and Howlin’ Wolf records and left her with the Led Zeppelin, Free, and Wishbone Ash stuff, because that’s what I hear a lot of here.
Taylor wrote and plays guitar on all ten songs. She owes much to Jimmy Page in her style, but I hear glints of Free, Bad Company, and Wishbone Ash stuff. Oh, and some Maggie Bell. Taylor, who seems to be in her twenties, has a HUGE deep and raspy voice. She writes a pretty good song too. Her hooks are good. Her style isn’t too over the top, considering most of today’s guitar slinging blues players--BUT. It’s all mis-categorized. There are NO blues progressions; no blue “notes,” nothing to the ear that would lead one to think this was a “blues” CD. So what is it? Well, it’s a solo artist CD with a band mixed like they wanna rock. The guitar is mixed big, so are the drums, and so is the bass.  Ruf should send this girl to American Idol and let the fans fall where they may. She could tour with Daughtry or The Black Crowes, or even Stone Temple Pilots, but I don’t think she belongs on a blues stage, no matter how progressive the venue.
Taylor has a lot going for her: her writing, her playing and her hooks. But she is mis-cast as a blues performer. Her title cut, “Diamonds In The Dirt” has a Bonnie Raitt  “Luck Of The Draw” feel, and it’s followed by a tune titled “Let It Burn” which owes some of its existence to “the “Cold Shot” riff, but Taylor is still genre-less, to me. There are some Jimi Hendrix nods which follow that show she knows her axe. Is this a female guitar slinger’s only avenue? To be a blues singer when her heart’s clearly in early 70’s rock? Too bad.
Two ways to go Joanne: stay true to your muse and get away from Ruf and whoever told you to be a blues singer; OR nurture a love of the blues and let at least some of it infiltrate your soul. You have talent--a lot of talent--but old fuddy duddies like me (look who comprised blues societies around the world) won’t give you much of a chance. You’re WAY better off sticking to your guns and sending this disc to rock, or alternative radio/reviewers.
Reviewed by David Stine
Posted by Crossroads Blues Society at 3:05 PM