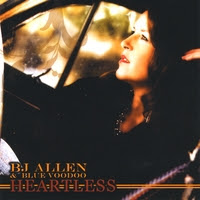 Heartless
BJ Allen & Blue VooDoo
Pure Air Music
www.bluevoodooblues.com
11 tracks
The Best of BJ Allen & Blue VooDoo
BJ Allen & Blue VooDoo
Circle M Music (Self-released)
www.bluevoodooblues.com
19 tracks
As the holidays approached last year I got a call from BJ Allen, a blues singer from Kirksville, Missouri, about upcoming festivals and gigs.  She also agreed to send me some of her music with her band Blue VooDoo to listen to.  The 2010 compilation and her 2008 fourth studio dated 2008 (released in 2009) were the two I received and am reviewing here.  I must say they are a good little band and are led by an entertaining and talented singer.
The studio set is predominantly original stuff, ranging from ballady torch songs to hot and sizzling, rocking blues.  On the ballad side, tracks like the title track, “Sunday Kind of Love” and “Get It While You Can” show the sensitive side of her performances and they are quite nicely done.  She’s got an expressive voice and carries off these slower songs with great musicality and tone.  The hotter tracks like “Radio Song” and “Iron City” show BJ less restrained and accompanied by some mean harp by bassist JP Hurd and wicked guitar by Jerry Fuller (who also fills in on keys).   David and Derek Daniels respectively appear on drums and percussion.  Nicely done stuff that keeps moving and makes you want to tap your feet and even get up and dance.
The other compilation CD is a mix of songs from the first four albums, released from 2003 to 2009.  It begins with a hot number entitled “The Storm” from an album of the same name and ends with the soulful Schuman-Ragovoy cover “Get it While You Can” from “Heartless.”  It is an excellent mix of stuff and features almost half of the music released on Allen’s 4 CDs.  Allen belts out traditional like “Sittin’ On Top of the World” with equal aplomb as her original stuff, making covers and new material shine brightly.  Solid guitar work and some nice harp and piano punctuation aptly support Allen’s musical presentation.
Her 4 CDs are available and can be previewed on CD Baby, so you can check her and the band out yourself- don’t take my word for it.  What you will find is an excellent band with great sound, led by a very talented singer.  BJ Allen and Blue VooDoo are a band that people will remember when they hear them!
Posted by Crossroads Blues Society at 11:01 AM