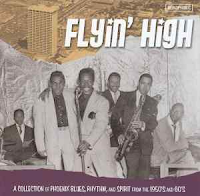 Flyin' High
Various Artists
SWMAF Records
www.bobcorritore.com/flyinhigh.html
27 tracks
Who would have thought the R&B scene was a really hotbed in Phoenix, Arizona, in the '50's and 60's?  The Blazers' "Funky Broadway" is the only big southwestern R&B hit that came to mind from that era, and I recall that was more a Fort Worth, Texas band.  Apparently Phoenix was a big stopover for bands and performers going back and forth from Southern California to and from Texas.
Many of the blues, R&B and gospel greats played there and many great local bands also sprang up and played the local clubs, too.  Bluesman Bob Corritore of Phoenix' Rhythm Room fame, with the assistance of "Johnny D" Dixon, took to Dixon's extensive collection from his musical vault and came up with these 27 released and unreleased songs highlighting the eras' R&B, gospel and early soul recordings. This is a superb collection of not-so-widely-known music that will titillate the fans of the genres represented- it is well worth the listen!
Jimmy Knight and his Knights of Rhythm, Jimmie "Playboy" Knight, Big Pete Pearson, Reverend Overstreet, and many somewhat known and somewhat unknown artists appear on this CD. Jimmy Knight plays the title tracks (parts 1 and 2,) which open and close the album.  Knight and Company offer a jumping mix of guitar and sax.  A classically humorous blues called “Give It Back” is similar to “Gimme Back My Wig” in theme, but asks for even more back.  John “Oklahoma Zeke” Lewis delivers this one quite well as he does “A Woman 78”.  Bud Spudd and the Sprouts give us “The Mash” and all I wanted after that was a little gravy.  The Tads offer up some nice call and response Doo Wop in “Hey Little Girl”.
This is a thoroughly entertaining mix of music that gives the listener an appreciation for the great local acts from Arizona from this era.  So many great acts that never really made it are always a part of music history.  Here we have tribute paid to some well deserving ones!  I loved this one!
Reviewed by Steve Jones
Posted by Crossroads Blues Society at 3:04 PM