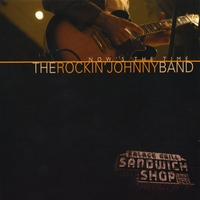 Now’s The Time
The Rockin’ Johnny Band
Self-Released
www.rockinjohnny band.com
13 tracks
Burgin is also a U of C grad and originally hails from Pennsylvania, but his immersion in Chicago blues was been pretty deep since he was only the fourth white bluesman to ever record on Delmark Records.  After a long, self-imposed hiatus from 2001 (after his almost  meteoric rise to local fame) to early 2009, he’s back with this new CD with a mix of somewhat nouveaux and 60’s-sounding blues.
Rockin Johnny Burgin had been a draw at the Chicago Blues Festival and he paid his dues at SmokeDaddy’s to become a great session band guy and front a pretty damn good band of his own.  Johnny has worked with Lurrie Bell, Lonesome River Band, Mississippi Heat, Little Arthur Duncan, Claire Lynch, Big Bill Morganfield, Pinetop Perkins, and Willie "Big Eyes" Smith over the years.  His sound is pure Chicago, with a precise yet tiny bit guttural tone to his guitar.  His vocals are pretty white bread at times, but that cleanness provides a contrasting backdrop to his guitar work.  And while he sounds very white vocally, he pulls it all off.
Rick Kreher adds his guitar to the mix, Bob Lorenz is on drums, John Sefner plays bass, and Greg Sefner is on keys.  The final track features Kenny Smith on drums and Sho Komiya on bass and was recorded in 2000 at B.L.U.E.S. on Halstead; the rest was recorded in February 2010 at a Chicago-land studio.  It has a very clean and balanced sound throughout.
The slow blues guitar solos on “A Man and the Blues” are seminal stuff.  Just beautiful work; his fingers blast out notes cleanly and purely.  His sound and tone are  moving– I loved this track.  The lyrics may lack a bit (somewhat predictable) but the guitar is incredibly good!
He shuffle along nicely on “Pink Champagne”; more nice solo work.  Actually, his guitar is almost impeccable from start to finish.  His guitar on the standard “Little Red Rooster” also shines despite this being one of the most covered songs around.  My only complaint is the breathy vocals that sometimes sound a little inauthentic to me.  They are not bad, they just sound like a young white guy.  But the superior guitar work here more than makes up for that.
Reviewed by Steve Jones
Posted by Crossroads Blues Society at 3:00 PM