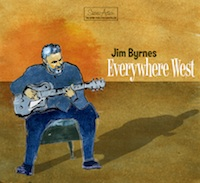 Everywhere West
Jim Byrnes
Black Hen Music
www.blackhenmusic.com
12 tracks
After Byrne took part in the All Star Tribute to the Music of the Mississippi Sheiks on CD and DVD he released this great solo CD, produced by his cohort Steve Dawson, who appears on every track, adding to the depth and charm of each cut.  Keith Lowe and Geoff Hicks are on bass and percussion, giving the album a good backbeat and solid accompaniment.  Chris Gestrin appears here and there on keyboards and adds some beauty and roundness to those cuts.  But it is Byrne’s vocals that really make this album special.  I love his articulation, growls, whines, howls, and down home approach to singing.
The CD opens with a full out track entitled “Hot As A Pistol” which is aptly titled; the added horn section burns, Gestrin titillates the keys on organ and Byrnes and Dawson picking and sliding make this a truly hot number.   The cuts vary from this heat to the down home sounds of “Bootlegger’s Blues”, where Daniel Lapp on mandolin and fiddle makes you want to get up and dance ,and “Walk On”, where Dawson’s picking on the National steel guitar  and the rest of the accompaniment hearken to simpler times.  Keith Bennett adds an interesting wrinkle to “Take Out Some Insuirance On Me” with his harp work.  The instrumentals on “No Mail Blues” are fast and hot, and Byrnes and the backing vocalists give us more traditional sounds to enjoy.  Lapp on trumpet with Bill Runge and Jerry Cook on sax are solid as a horn section on the  four tracks they contribute to, and especially impressed me with the real depth of sound they provided.
This is a solid album from top to bottom.  I can’t complain about any of the cuts– they are traditional yet fresh and down home yet modern; even the old style covers have new life with Byrnes.  He is a solid vocalist and that is what I enjoyed most about this.  A solidly produced album with a tightly intertwined set of musicians who were equal to the task, but Byrnes just can sing so well with his homespun and down home charm that makes you want to sit on the front porch and listen to him sing and play all day.
Acoustic and traditional blues lovers will like this one a lot, but so will anyone who wants to sample a new and upbeat take on the root sof the blues.  Byrnes is always upbeat and solid and Dawson’s playing and production in support make this an entertaining and enjoyable album to experience.
Reviewed by Steve Jones
Posted by Crossroads Blues Society at 2:53 PM