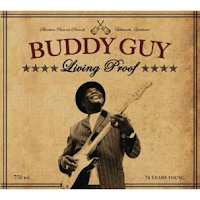 Living Proof
Buddy Guy
Silvertone Records
12 Tracks
The latest album Living Proof from blues guitarist and vocalist Buddy Guy is somewhat of a retrospective journey of Guys career. He is joined on this masterful blues collection by two of his friends B.B. King and Carlos Santana.
After many years of paying his dues, Buddy Guy has emerged as one of the top bluesman of his generation, joined by a select few like both B.B. King, Otis Rush, and Lonnie Brooks. Buddy worked the Chicago clubs for a decade, starting as a sideman playing with the great Raful Neal (Kenny Neal's father). He came to Chicago in 1957 trying to land a record contract at the age of 21. He was encouraged by the legendary Muddy Waters when gigs weren't extremely lucrative for young bluesmen. His first accolade was winning a guitar contest at the Blue Flame on the South Side, combining his great guitar playing ability and showmanship using his 100-foot guitar cord which allowed him to wander through the audience and down the street. This trademark stayed with him throughout his career.
He has since produced 12 albums and a comprehensive box set. Living Proof starts out with "74 Years Young," an acoustic tune in the beginning, as the singer gives us a synopsis of his life as a bluesman. Then, about 90 seconds into the tune, he cuts loose on electric guitar, with a solo hot enough to raise the dead. He follows with  "Thank Me Someday", a bayou sound giving us his account his early childhood and his start as a guitar legend.  "On the Road" and "Too Soon" are tunes that give Guy the opportunity to shake the earth with his explosive guitar licks.
“Stay Around a Little Longer” is a little slower tune with a cameo spot by B.B. King. It allows B.B. King and Buddy to reflect on life and a lasting friendship. The two blues legends trade compliments and guitar solos, reassuring us they both have a lot yet to give. They reinforce their lifelong friendship, by stating that they will be friends even after they’re "pushing up daisies." This tune is a soothing change after strong, powerful start to the cd. "Key Don't Fit" ...your lock provides that classic blues theme of another failed relationship. Guy wails out the lyrics “I got this funny feeling you don’t want me ‘round anymore.” Buddy answers this song with the flipside tune later in the album "Let the Door Knob Hit Ya." In the title track "Living Proof" Buddy reminds us that he indeed is living proof of what you can accomplish with a positive attitude. On this number, he really tears up the fret board with guitar licks only Buddy can provide. Guy uses a couple backup singers to provide terrific harmony, including Bekka Bramlett, singer, songwriter, and daughter of famed folk duo Delaney and Bonnie. "Where The Blues Begins" creates the purist of blues with Carlos Santana providing his guitar solo and Buddy answering with stellar vocals and guitar. He continues the album with classic blues numbers "Everybody's Got To Go" and "Guess What." Buddy Guy concludes this showcase of tunes with a rousing guitar instrumental "Skanky." I hope that indeed he will be providing the blues world with more cds of this caliber for years to come.
Reviewed by Rick Davis
Posted by Crossroads Blues Society at 3:01 PM