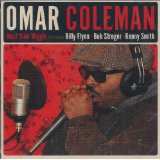 My first exposure to Omar Coleman came when I heard him on Very Lucky Man, backing Sean Carney on a release from last year. Some of you may have heard Coleman playing harp as a member of guitarist John Primer's Real Deal Blues band. A relative newcomer to the blues world, Coleman has quickly incorporated much of the traditional Chicago blues tradition into his singing and playing.

The quality of his work is highlighted by the stellar band that backs him on his first solo release. When you have Billy Flynn on guitar plus a rhythm section of Bob Stroger on bass and Kenny “Beedy Eyes” Smith on drums, you know that the music will be authentic and dig deep into the well of human emotions. Flynn's tasteful licks remind us once again that he has the knack for always playing just the right notes while Stroger and Smith stay deep in the pocket throughout the disc.

The set-list contains eight Coleman originals that show he has cultivated a real understanding of the elements that add up to a noteworthy song. The lazy pace of “She's Too Fast for Me” serves as a backdrop for Coleman's emotionally charged vocal with Aryio on piano filling out the arrangement. “I'm a Good Provider” sports an aggressive tempo with immaculate phrasing from Flynn as Coleman provides a frank description of the end of a love affair. The opening tune, “You Got a Hold on Me”, finds the singer describing all he does to keep his woman happy. Coleman resorts to more generic lyrics on “Sit Down Girl”, but the cut is rescued by surging rhythm punctuated by Brian Leach on the organ.

Coleman penned two instrumentals that spotlight his prowess on the harmonica. The title track finds him playing  robust lines that extend into some high, reedy licks before he finishes things off with some hard blowing that Chicago's west side. “Giardinara Blues” is a barn-burner that leaves no doubt that Coleman knows his way around a harp.

The legacy of Little Walter looms large for any harp player and Coleman acknowledges his debt  with a vigorous cover of Walter's “Ah'w Baby” with a hardy vocal from Coleman while “Crazy Mixed Up World” features a brief harp solo that leaves you wanting more. On the much-covered “Scratch My Back”, Coleman's lusty singing injects plenty of life into the classic. Stroger sits out on Lightnin' Hopkin's “Mojo Hand” with Flynn switching to acoustic guitar. Smith supplies a driving beat as Coleman again sings and plays with conviction. Equally fine is the low-keyed rendition of “It Hurts Me Too” with one of Coleman's best vocals and more powerful harp work.

If you love the more traditional blues styles, this recording is just what the doctor ordered. I don't remember hearing much about this one when it came out last year. That's a shame because, as this disc shows, Omar Coleman deserves the attention of the worldwide blues community. And in case you need any more incentive to purchase a copy of this fine release, proceeds from the sale benefit the Northern Louisiana Brain & Spinal Cord Injury Foundation (www.brainhelp.org). Don't let this one slip by!

Posted by Crossroads Blues Society at 8:04 AM