Been There Done That reviewed by Harmonica Joe Poluyanskis 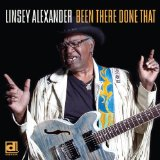 Been There Done That
Linsey Alexander
Delmark Records
www.linsey-alexander.com
12 tracks/62:32

Delmark Records has just done another fine job with the release of Linsey Alexander’s CD “Been There Done That.” Alexander is truly a blues icon having playing the blues his way for several decades now. Having been born in Mississippi and being raised in Memphis Tennessee, Linsey left the South to head for Chicago to play the blues. After playing the Southside for many years he now has been on the Northside for at least the last 15 years. He has played with many of the great blues greats including Buddy Guy, AC Reed, Magic Slim and BB King to name just a few. Over the years he released several CDs on his own and now “Been There Done That” is here to let us know what Linsey Alexander is all about.

Joining Alexander on this recording we have Roosevelt Purifoy on piano and organ, Greg McDaniel on bass, James Wilson on drums and Billy Branch blowing harp on 3 tunes. Add the horns of Ryan Nyther (trumpet) and Bryan Fritz (sax) plus Mike Wheeler and Fabrizio “Breezy” Rodio adding rhythm and solo guitar we have a great 9 piece band for this CD. This whole recording was basically recorded as is with just a few guitar overdubs.

Right from the start with a blues shuffle, “Raffle Ticket”, I know that I am in for a real treat of Chicago blues. Billy Branch walks us into the tune with some of his awesome harp playing as “Hoochie Man” Alexander takes over with his powerful blues vocals. Behind all of this fine stuff is Purifoy pounding the ivory as James Wilson and Greg McDaniel keep the blues train running down the track. Linsey also showcases his guitar style with a couple of solos. This is really a great tune to open this recording.

“Been There Done That” takes us to that smooth place of rhythm & blues and features Purifoy on organ and the horns of Nyther and Fritz. Here Linsey give us the chance to just kick back and take in his voice and lyrics. In the same mode, he takes on the Willie Kent tune, “Looks Like It’s Going To Rain”. This is a swell tribute to his now departed long time friend. Alexander showcases his vocals and some Albert King sounding guitar work on this track. Also standing out here is Purifoy on keys and the tasteful horns in the background.

If you have a craving for some awesome harmonica licks, you can listen over and over to Billy Branch on “My Mama Gave Me The Blues”. This is truly some great stuff and what blues harp is all about. Good job Billy! “Hoochie Man” is just that on this tune as his vocals and guitar work are powerful on this slow blues tune. This, to me, is the best song on this recording.
Linsey Alexander has nailed the true meaning of the blues with this project. He does the blues his way and it is the blues. “Been There Done That” is over an hour of blues pleasure performed by one fine group of musicians. Having reviewed several CD’s in the recent past that just barely touch upon the genre of the blues I consider this a real treat to listen to.

Posted by Crossroads Blues Society at 7:54 AM