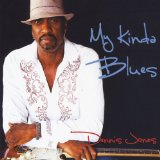 Blind Racoon publicist sent this great dual package of music from Dennis Jones and his band.  Let me tell you that if you need high energy music with cutting edge lyrics and topical songs, this is some stuff to get hold of.  Jones is a great guitar player who is also in touch with today’s world and its’ plight.

The CD is all new stuff from Jones.  Joining him on “Same Train” is Kenny Neal on harp and vocals.  Jones is noted for shifting from edgy blues over to the country. Here he goes acoustic, adds some humorous commentary how he and his woman have opposite talents and likes, but they are on the same train, just different tracks.  Neal and his harp blend and bend into this really well, making the song even better.  Guitar Shorty is with Jones on “You Took My Baby”, straight ahead, driving Chicago blues with  huge guitar sound.  Shorty and Jones are a great combo!

The rest of this is Jonesing.  And it’s really good Jonesing.  He opens with “Jesus or The Bottle”, the tale of sinning televagelists and their hypocritical life styles.  This is a heavy and hot song, and this man from Baltimore nails it.  Adding some voiceovers of “confessions” by some real televangelists, it is a monster cut. “Text Us Girl” comments on us as a society.  “We used to have sex, now we just text dirty words all the time.”  I don’t think an explanation is needed there.  The title cut is another hot and driving song, with Jones laying on heavy with his guitar.  He sings of his kind of blues, stating  “Sit back and let me do my own thing.”  He does not want to do what the forefathers have done, he wants to be himself.

There is hot rocking blues throughout this CD.  Jump blues like “They Say”  swings like others who do jump and swing, but it’s got Jones and his edginess. Jones gives us some Hendrix-styled stuff in “Good For Me;” raw, visceral, with minimalistic and breathy vocals.  “One More Dance Follows” with more huge guitar and solos.

“I Want You” is a another bouncing track.  “Don’t want your problem, I want you” is the theme here.  This is not a relationship built on conversation and doing things together, except one.  The guitar fills in the missing information.  He closes with slow blues in “Baltimore Blues”, playing and testifying instrumentally about his home town.  Huge, great cut.  This CD is filled top to bottom with a rocking good time!

Accompanying the CD was a DVD of live music from older albums.  With a total of 18 tracks, there is a great sampling of his works.  Whether he is doing his thing on the strat, playing his Les Paul or honoring his grandfather on the telecaster, the fret work is spectacular.  Big guitar, but it is not oppressive nor over done.  There is air between the notes on the solos, and we get to hear how this man can express him self with his fingers.

Michael Turner on drums, percussion and backing vocals and Samuel Correa on bass appear both here and on the CD.  They are a powerful backline and stay with and support the front man nicely.  This is a hot CD and DVD.  If you need an intro to Mr. Jones, this is a good way to get it.  If you are already a fan, what are you waiting for? Go get them.

Posted by Crossroads Blues Society at 7:42 AM