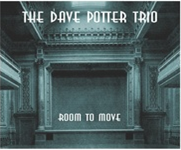 Anyone who has ever attended one of the Monday night Blues jams held in Beloit over the last three and half years will know that guitarist Dave Potter has been the host of that series since its inception. Others will remember that Dave was the original guitar player for the Jimmys, appearing on their CD Gimme the Jimmys. Potter has a number of weekly gigs throughout southern Wisconsin, giving him the opportunities to develop a tight sound with his band. Recently Potter took two of his favorite musicians, keyboardist Dave Hernandez and drummer Steve Dougherty, into the studio for a five hour session that produced fourteen cuts recorded live on tape without overdubs. Some cuts would have benefited  from the addition of a bass guitar but overall the sound quality is quite acceptable

There is a good mix of vocal tracks and instrumental numbers. The opener, “Fine”, showcases Potter's skill at developing intriguing guitar lines without overplaying while Hernandez lends support utilizing the organ setting on his Yamaha keyboard.  The trio is equally effective on a soulful rendition of Curtis Mayfield's classic “People Get Ready” while “Blue Bossa” gives Potter the chance to show off his jazz chops. Another instrumental, “Coming Home Baby” finds Potter and Hernandez trading solos over Dougherty's propulsive drumming. Plenty of guitarists over the years have cut their teeth on the instrumental standard, “Sleepwalk”. Potter's version finds the guitarist again showing tasteful restraint, sticking close to melody line while managing to add a few of his own embellishments that make the tune one of the highlights. “Coming Home Baby” finds Hernandez laying down some greasy organ licks.

Hernandez shows off his vocal skills on a fine rendition of “Groovin'”. Add Potter's tasteful solo and you have another high point on the disc. The group slows the pace on “Yonders Wall”, giving the tune a funky groove. Potter is at his best on “After the Rain”, his voice capturing the intense longing expressed in this Damon Fowler classic. Dougherty takes listeners to the west side of Chicago with a soulful rendition of Magic Sam's “Easy Baby”. You get mixed results on other tracks with Hernandez missing the mark on “Ain't No Sunshine” before recovering with a solid effort on “Sunny”. Potter effectively navigates the up-tempo “In My Room” but he sounds a bit off at a similar pace on “Big Jim”, which benefits from his fiery guitar solo.

Potter continues to put a lot of time, energy and enthusiasm in promoting blues music in southern Wisconsin and northern Illinois. This recording is an accurate – and highly enjoyable – statement on the current state of his musical artistry. You can check tunes out at his website. If you like what you hear, Dave is selling copies on-line for only $9.95 including free shipping. Give it a listen. Dave deserves the support !!!

Posted by Crossroads Blues Society at 7:46 AM