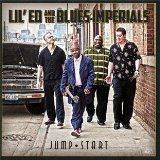 Lil’ Ed’s new release on Alligator records offers up 14  cuts for his fans, with one cover of uncle JB Hutto’s  “If You Cahnge Your Mind” and the other 13 written by Ed, Ed and his wife Pam or Ed and Harrison Sumner. Featured on the CD along with Ed are Michael Garret on guitar, James “Pookie” Young on bass and Kelly Littleton on drums.  Marty Sammon also appears on organ and piano on five tracks.

“Jump Right In” is a cute and innuendo- filled cut where Williams and Sumner have crafted an over the top blues song that will be covered by others because of the catchy lyrics and cool slide parts.  In fact, I would have to say that the cuts by Ed and Sumner and the Hutto cover are probably the highlights of the disc.  “You Burnt Me” and House of Cards” are the other two co-authored by Williams and Sumner. “You Burnt Me” opens to a guitar solo and Ed hollering about how he’s been tossed out on the streets.  Well done!  “House of Cards” begins with a stinging guitar sound that is featured throughout.  I liked these tracks a lot.  Ed’s homage to Uncle JB is also excellent.  “If You Change your Mind” has a sweet slide and Ed as the penultimate blues shouter of this era.  It’s got a big, rich sound and hearkens back to those great old days when West Side music was king.

The two cuts from Ed are also pretty good ones.  “Musical Mechanical Electrical Man”, an amusing song that runs 100 miles per hour as Ed sings about being his woman’s ,am who can provide music along with electrical and mechanical repairs. On “My Chains are Gone”, Ed and his guitar wail and moan and the organ fills in as he sings about being free of the women who wronged him.

Where the album drags a bit are the songs Ed and his wife wrote.  They begin to merge together in the Ed Williams songbook of stuff that maybe we have heard before.  Good stuff– don’t get me wrong, but it’s stuff that is similar to past efforts.  Maybe I’m being picky here; the CD is fun and gives us a huge dose of high energy.  Lil’ Ed fans will eat it up, but it seems a little repetitious at times.

Ed’s fans will enjoy this CD top to bottom and new fans will get a good listen to one of the top high energy acts in the blues world.  There’s some great new stuff here for those looking for Lil Ed the artist to wow them.  I just think trying to get 14 new songs with a lot of variety and freshness is a tough task and a few of the songs fell short because of that.  But there are some gems here and at least one if not several that will become classic Blues Imperial songs for all time.

Posted by Crossroads Blues Society at 8:02 AM