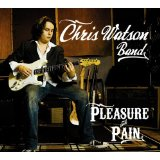 “Pleasure and Pain” is the Chris Watson Band’s new CD after their first recording “Just For Show” in 2010. The first recording got Watson and is band plenty of air time as well as being recognized by the Blues Underground Network as the winner of the Future of the Blues award. Watson has been playing guitar since he was 13.He took to it with a purpose, to play the blues. Soon he was able to play in the style of Stevie Ray Vaughan, Albert Collins and Albert King to name some of his influences. Not long after he was playing local venues honing his talent as a guitarist and finally ending up as the lead guitarist in his dad’s band. With the Up All Night Band he also became a singer as well as a song writer.

In 2006, Watson formed the Chris Watson Band and surrounded himself with a good group of musicians. Playing along with Chris’s vocals and guitar on the CD are bass players Billy Acord and Chris Gipson on different tracks, Jon Zoog and Jason Thomas switching off on drums. Sharing the keyboard duties  are Scott Morris and Eric Scortia while Justin Barbee horns in with his trumpet Jeff Dazey  adds a tasteful sax to the mix. Backup vocals are added to the mix by a great sounding Kristin Major completing the lineup of musicians on the CD.

“Pleasure and Pain” presents a good mix of 9 tunes penned by Watson and also 3 well done covers that also includes Chris’s take on Sean Costello’s “Hard Luck Woman”. On this track Chris plays a couple of rock solid guitar solos as well as singing the lyrics with deep feeling and clarity. Jason Thomas pushes the drum backing as needed to accent Watson’s guitar work. This is a good track to listen to. “Heart On My Sleeve” has a good Texas rock blues feel to it which gives me a sense of Hamilton Loomis to it. This song has that funkiness to it but does not drift away from the genre. Watson’s vocals seem just to flow with his guitar work creating a great balance between the two. Kristin Major also brings her well placed vocals to the stage on this track. Chris leaves plenty of space during his guitar solo and leaves us with a sense of music that we pay attention to.

A standout tune on “Pleasure and Pain” is the slow ballad, “Heartache”. Watson shows that he can bring out true emotion from his guitar as it cries out and whines. This is a tale of the heartache of love dragging one down to the depth of pain. In the lyrics he states he will overcome lost love, “but I’ll carry Lord I won’t cry, I’ll be gone in the blink of an eye”. This is what the blues is all about. The addition of the horns and Major’s backing vocals add a bunch to “Heartache”.  This is a fine blues tune.

Chris Watson and his band can take us into many places from straight blues, Texas rock blues. Gospel, boogies and even into funky. In all of this, what stands out is Watson’s ability to bring his guitar, vocals, lyrics and band to that place that it is all enjoyable to listen to. “Pleasure and Pain” has the type of music that we listen to and say this is the blues. The Chris Watson Band should travel a long ways with their style of music.

Posted by Crossroads Blues Society at 7:49 AM