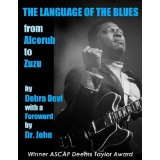 Have you ever heard an old blues song and been left a bit puzzled by some of the song's lyrics? We all have encounter phrases in songs that seem to speak a different language than what we encounter in our daily lives. Some lyrics reference a by-gone era that most of us have never experienced, so we are hard-pressed to understand them given that we lack the proper context.

Thanks to punk rock guitarist Debra Devi, you now have a book that can serve as your Blues dictionary. First published in book form in 2006, this award-winning project provides readers with  over 150 easy-to-read definitions that will definitely expand your appreciation for blues songs. The author first became interested in the music after being moved to dance at a Koko Taylor show in Milwaukee, followed a few weeks later by a equally stunning B.B. King performance. Eventually Devi became an associate editor for Blues Revue magazine, gaining an even greater appreciation for the imagery and history of the music.

Don't be put off by the term “dictionary” - this is not a dry, scholarly treatise on the origin of language. Devi conducted interviews with a number of well-known blues artists including Little Milton, Hubert Sumlin, Robert Jr. Lockwood, and Jimmie Vaughan. It was the Sumlin interview that really inspired Devi as Hubert related a little-known tale about the song “Killing Floor”, written by Howlin' Wolf after  his wife emptied a shotgun full of buckshot into him in a fit of jealousy. These stories and comments bring the definitions into greater focus. And the author does not shy away from the sexual references. You can read explicit explanations for “coffee grinding”, “lemon squeezer”, “salty dog” and “stingaree”.

Devi did extensive research in putting this book together, as witnessed by her ten pages of notes listed at the end. She dug deep into the African tribal roots in many cases, tracing links to specific cultures while discussing how words retained a similar meaning in a new land after harrowing voyages on slave vessels. There are helpful readings on terms associated with the practice of hoodoo and VooDoo - “black cat bone”, “goofer dust”, “John The Conqueror root” and “mojo hand”. In six pages, Devi offers a succinct description of “blues” and its African heritage that really forms the basis for the rest of the book.

There are plenty of photos of legendary blues performers spread throughout the book, with many sure to be familiar to blues fans. Another bonus feature is the menu of songs and performers that accompanies each listing, songs that feature the word or phrase under consideration. Just be forewarned that you are going to have to have a very large collection of blues recordings to be able to play most of the material the author recommends. The only drawback is that some of the material is repeated in several definitions due to similarities in usage.

In the end, Debra Devi provides insight, personal anecdotes and humor in a well-written format. If you want to increase your appreciation and enjoyment of the music, make sure you check out this “blues dictionary”.

Posted by Crossroads Blues Society at 7:33 AM

Thanks for your wonderful review of my book, Mark! I'm very excited to let you and your readers know that the PRINT edition of The Language of the Blues has just been released!

It's for sale on Bluescentric, Amazon and through my website at www.devi-rock.com/thelanguageoftheblues.

Thanks for all you do for the blues!