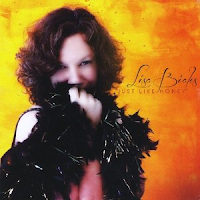 I was very impressed by the packaging, liner notes, photos and information. I'm not familiar with Lisa's previous works.  She mentions five other releases (Editor– there are actually six other albums she has released), but the band that's assembled is more than just average. Tommy Talton on guitars, Bill Stewart on drums, Marshall Coats on bass and Paul Hornsby on Hammond B3 and piano. This group creates a nice base for the material that lisa has gathered.

The Etta James cover of "Damn Your Eyes" and "When You Were Mine", a song by producer E.G. Kight. are the two showcase numbers. The fourteen tracks make quite a mixture of her musical tastes, which range from Memphis Minnie to Bonnie Raitt and back to Candy Kane.

I think the Album would work well at
an afternoon deck gathering but I don't
think I'd take it on a night drive.

Posted by Crossroads Blues Society at 7:40 AM