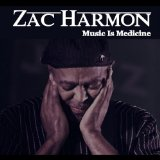 It did not seem like it’s been three years since Zac Harmon released a new CD, but is has.  Zac is always involved in something in the blues world, whether it is  working with the Blues Foundation or touring for our troops.  He is always doing something and when he sits down to give us new music it’s always a thrill.

Born in Jackson, Mississippi and a fixture in the West Coat music scene, Harmon is an outstanding musician and songwriter.  His diverse skills and styles of music infused into his blues range from he sublime to the extraordinary.

Here he opens with a cut called “Miss American Girl” where he picks out a sweet guitar line and Corey Lacy adds sultry and funky keyboard work to make this a pop-ish sort of funky R&B tune.  He then transitions into deep blues with “Blue Pill Thrill”; the wawa peddle is out and the bass is deep in this one.  He sings about the blue pill thrill, what Jack and Jill went up the hill for.  His song about his doctor’s prescription has a stinging guitar solo that is quite nice.

“Running from the Devil” is a story of personal challenges that we have to run away from to “keep up with the lord.” It’s up tempo beat is quite nice.  He follows with his “Grandma’s Prayer”, a slow and funky number where he and his band mates pay homage to their Grand Mothers who prayed and cared for them.  It’s perhaps a little overdone but none the less is still touching.  “Drowning in Hollywood” picks it back up and we have Harmon singing of his woes in Hollywood.  The hustling and bustling there causes him to crown in the environment.

“Country Boy” is some slower rocking funked up blues with a big sound.  The guitar intro is huge, and then he breaks into this cut about his youth in Jackson, MS.  “I’d Rather Be With You” is somewhat of a calypso number.  That feel continues in “I’d Rather Be With You’.  He then breaks into a big, soulful story in “Talk to Me”, with the keys providing an orchestral sound  and an up front bass drum pudding out the beat.  A classic sounding soul tune.

“Wounded” shifts gears.  Much more stark and bare, Harmon opens with his guitar and then comes in on vocals.  Sueann Carwell then comes in and after her lines the two of them do a duet backed by the rest of the band.  Singing of a relationship with deception and lack of fulfillment, they do a nice job here.  Up next is “Healer”; Harmon mixes blues and funk as he sings about how his music can heal the soul.  He closes with a big sounding “Joanna”, again showing the West Coat and soul influences.

Zac’s vocals are clean and sweet throughout and the production is tight.  Harmon can entertain while describing his feelings in this somewhat autobiographical set of tunes.  Joining Harmon are Cedric Goodman of vocals and drums, Lacy as noted on keys (and vocals), Buthel on bass, Chris Troy on keys for a couple of tracks, and others filling in here and there.

This is a funky and soulful album where the blues are there but sometimes taking a back seat, although they do get out and about and make themselves heard.  I have always been impressed with what Harmon produces for others and his own work is equally impressive.  For fans of funky blues, this is a CD for you!

Posted by Crossroads Blues Society at 7:43 AM