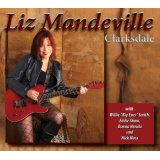 With five CDs now under her belt, Liz Mandeville remains a fresh and exciting presence in the blues world.  Now on her own record label, Mandeville began this effort with good friend Willie “Big Eyes” Smith and bassist Darryl Wright and got five tracks down before Smith left to honor some tour dates.  Willie, who had urged Mandeville on to start her own label, promised to return to finish the album after his tour, but the Big Man upstairs had other plans for Muddy Water’s old beat keeper. Mandeville pressed on after Smith’s passing and cut a half dozen more songs in his honor, half of them with her 2012 IBC duo partner Donna Herula.

What I really like about this album is Liz’ voice.  Grit, guts, and feeling really pop– she’s got the blues and lets you know about it.  The songs range over a variety of topics, from the lamentations of “A Soldiers Wife” to the double entendres of “Sweet Potato Pie” she shows she can slow it down with feeling or deliver the heat.  The latter features none other than Eddie Shaw on sax, who adds a nice layer of grease to the jumping and swing “”Pie”.  Herula’s slide on the former cut is also inspiring.

Mandeville bares it all in an acapella cut with deep Gospel roots called “No Fear/Everything.”  She blends blues and Gospel in this song of hope and restoration.  Nick Moss is featured on the last track, adding his stinging electric guitar.  Liz sings “My Mama Wears Combat Boots.”  When kids would kid each other about other’s mom’s , Mandeville sings that her mama might not be fat or ugly as kids may chide, but she does wear combat boots and carries a gun that shoots!  An apt song for today’s  military where women serve as proudly as men do.

A visit to the Delta inspired this album, and in “Clarksdale/Riverside Hotel Blues” we have Liz singing along with Leandro Lopez-Varady tickling the keys with equal aplomb to Mandeville.  She sings of the history and wonder of this birthplace of the blues.  “4:20 Blues” take politicians to the wood shed for their war mongering.  This cut could be something lifted from the peace movement of decades past, with Liz irate and at her gutsiest.

Smith appears on drums on all of the tracks he participated in.  His shuffling is always a pleasure.  He adds his harp to the opener “Roadside Produce Stand” and “Walking and Talking to You” and vocally backs Mandeville on the opening cut.  It rocks and swings with the vocals and slick harp, and sets a high standard for the other songs to follow. “Walking and Talking” is real Chicago blues with Liz at the bottom of her vocal range and Willie’s harp just laying it out there.

Also on the CD is Jim Godsey, wjho engineered, mixed and mastered the album in addition to playing bass and drums in support of Liz and Nick Moss on their cut.  The production is clean and balanced.

All the cuts are new and pretty darn good.  Mandeville’s efforts here are fairly inspired and I think she holds her own with the blues women of today.  She had some surgery and her trip to Clarksdale helped her recover physically while inspiring her musically.  I think most blues fans will find something here to savor!

Posted by Crossroads Blues Society at 7:45 AM