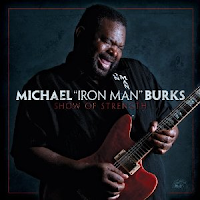 Michael Burks had just completed his new CD Show of Strength, soon to be released on Alligator Records. Unfortunately it will be his final statement, leaving the blues world with a legacy of remarkable modern blues music. This blues veteran was in route home to Arkansas after a European tour, when he collapsed at the Hartsfield-Jackson Atlanta International Airport and died on May 6th, 2012 at the age of 54.

He started playing guitar at the age of two with his father Frederick, who was a bass player in Milwaukee blues clubs, often backing Sonny Boy Williamson II and other touring or local artists. Michael's grandfather, Joe Burks, played acoustic Delta blues guitar in Camden, Arkansas. By the age of 14, Michael was touring as a guitar player with Michael Clay and the Fabulous Souls. In the early 1970s, his family moved to Arkansas and built a juke-joint named the Bradley Ferry Country Club, where he was hired as the house band leader and backed big names in the blues and R&B world. When the club closed in the 1980s, he left music only to return in 1994. He released his self-produced debut CD titled From The Inside Out in 1997, launching his career as one of the hardest working bluesman in the business. He followed up after signing with Alligator Records with Make It Rain in 2001, I Smell Smoke in 2003, and Iron Man in 2008. Michael was nominated for numerous blues awards for Iron Man earning him a top spot among contemporary blues guitarists.

He was at the top of his career with his latest Alligator release ironically titled Show of Strength. Burk's high powered guitar and strong, soulful vocals are very distinctive both live and on disc. He is backed on this latest CD by Wayne Sharp on organ, piano, and backing vocals, Terrence Grayson on bass and backing vocals, and Chuck “Popcorn” Louden on drums and backing vocals. Additional musicians are Roosevelt Purifoy on keyboards and Scott Dirks on harmonica. Show of Strength opens with fiery guitar licks on "Count On You," along with deep vocals straight from the heart. "Take A Chance On Me, Baby," the first of five tunes Michael either wrote or co-wrote, delivers the same guitar attack at a much slower pace.  He will take you to the top on "Storm Warning," and  "Can You Read Between The Lines," blues numbers that typify just how well Michael can tear it up on lead guitar, combined with other band members contributing great rhythm guitar and keyboards. It is really a solid performance by the entire band! Next on the set list is "Cross Eyed Woman" featuring Michael opening with his typical lead guitar style and quickly moving into some burning slide guitar leads scorching the fret board along with superb keyboards from Wayne Sharp. "Little Juke Joint" brings back memories of growing up in his family juke joint where he recalls playing blues from sun down to sun up. It features some exceptional harmonica playing by Scott Dirks. "24 Hour Blues" is one of most powerful, soul drenched tunes on the CD, with searing guitar leads once again. It is followed up by the hard drivin' powerful "Valley Of Tears." "Since I Been Loving You," a self-penned tune, delivers a slower, straight ahead, smooth blues sound with Michael once again center state with his guitar solos. His vocals are very convincing on the song "I Want To Get You Back." Another original song, "What Does It Take To Please You," in my opinion, is the is the best cuts on the CD offering well executed West Coast guitar solos by Burks. "Feel Like Going Home," with a spectacular piano introduction, is very fitting for his final studio recording, with Michael Burks seemingly reflecting on life and going out with one of the best guitar solos of his studio career.

I had the opportunity to meet Michael at Bamfest (Bellville American Music Festival) in Bellville, Wisconsin in 2007. Michael was one of those recording blues artists who had time to discuss the blues with any of his fans at any given time. He had a voice that would captivate audiences much like the late great Albert King. He will certainly be missed by blues fans the world over! His legacy will ring out in the blues world forever!

Posted by Crossroads Blues Society at 7:56 AM