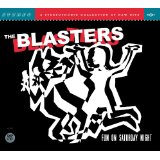 Over thirty years ago, the Blasters burst on the scene with a potent blend of rock, blues and country influences that the band injected with a hard-rocking sound. Led by the Alvin brothers – Phil and Dave – the group was at the forefront of the American roots music movement that continues to this day.

Their fire burned bright over five years with four highly regarded studio recordings and one live album. Then it fell apart as Dave decided to pursue a solo career and Phil did post-graduate work in mathematics. Phil reformed the band a few years later and it has endured with a variety of line-ups, including a couple of brief reunion tours with Dave back in the fold.

It’s been eight years since the last Blasters studio recording but they quickly establish that they haven’t lost a thing as they open with a spirited take of Tiny Bradshaw’s “Well Oh Well”. Phil’s voice rings out loud and clear with the usual level of barely contained excitement. Guitarist Keith Wyatt rips off the first of his nimble-fingered solos while original members John Bazz on bass and Bill Bateman on drums keep the beat rolling along. Next up is the country music classic “Jackson” with Exene Cervenka – punk band X – joining Alvin for a lusty duet with Wyatt supplying the requisite twangy guitar. “Breath of My Love” is a ballad with outstanding backing vocals from Eddie Nichols and Jeff Neal. The doo-wop style masks the torturous saga of a domestic dispute gone terribly wrong.

Then the band reverts to its blues roots with a high-octane rendition of the title song with Wyatt once again playing with distinction while Alvin shouts the blues like one of his hero’s, Big Joe Turner. Wyatt delivers some blistering guitar on Magic Sam’s “Love Me With a Feeling” while Alvin’s robust vocal on “Rock My Blues Away” is memorable moment. All the members had a hand in writing “Penny”, a raw worrying blues that owes a debt to the Howlin’ Wolf legacy. Alvin’s finest moment occurs on Sonny Boy Williamson’s (Rice Miller) “No More Nights By Myself”. With sparse accompaniment, his intimate lamentation on heartache is punctuated by mournful tones from his harp, connecting with listeners on a primal level.

Other tracks include a crackling version of “I Don’t Want Cha”, with more harp from Alvin, and a brief run-through of James Brown’s “Please Please Please” sparked by a gritty vocal from the leader. “The Yodeling Mountaineer” offers a dramatic change of pace. Yodeling isn’t for everyone but Alvin quickly shows he has mastered the style.

The final track is an acoustic re-working of one of the Blasters best-known tunes, “Marie Marie”, with Kid Ramos on bajo sexto adding to the south-of-the-border feel. Written by Dave Alvin, the song is retitled “Maria Maria” with lyrics in Spanish over a languid pace to create a more pensive approach compared to the original.

The only issue with this one is the relatively short playing time. And, while it falls a bit short of the high points of the Blasters earlier recordings, this one proves that the band can still rock the house in addition to energizing their forays into the blues idiom. Buy a copy but don’t wait for the weekend – put it on, turn it up and dance your blues away!

Posted by Crossroads Blues Society at 8:05 AM