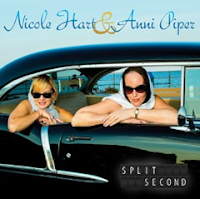 Although Nicole and Anni had never met before this recording, Blues Leaf Records brought Nicole from Florida, Anni from Australia, Juke Joint Jonny from California, and a host of other musicians together in New Jersey to create this collaboration. Both Nicole and Anni signed with the record label in 2008 and have released solo albums since then.

Nicole jokes she's been singing since the doctor took her out of her mama and spanked her for air, "....that was my first high note!"  With her father's model as an opera singer, Nicole began singing church soprano as a young girl.  Later she sang harmony in Capella madrigal groups and choruses.

Anni began playing electric guitar at 12.  She became a devoted musician at 14 when she received her first bass.  She attributes her blues direction initially to the Paul Butterfield Blues Band when she first heard the band play "Born in Chicago".

Another relatively long album, this one is definitely a keeper!  Great female vocals and harmonies, blues harp by 2010 Blues Hall of Fame inductee, Sandy Mack, and a host of other musicians, combine their talents to create a great album you can listen to over and over again (I've listened to it at least 20 times so far in the past month).

Although I'm a fan of every single track, some of my favorites are the fresh takes of oldie-goldies hits like Roy Orbison's 1962 "Dream Baby" and the Everly Brothers 1961 "Walk Right Back".  Nicole's soulful original song "Listen to the Rain Fall" is another absolute favorite.  In a male-dominated business, it is always a treat to listen to women who can deliver the blues.  Highly, highly recommended.