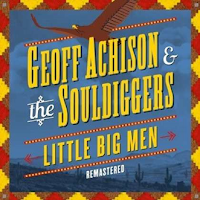 Geoff Achison is a native of South East Australia where he has practiced and performed guitar from an early age. His first gig was playing lead guitar with one of Melbourne's top blues bands Dutch Tilders & The Blues Club. In 1995, he was the representative for the Melbourne Blues Society at the International Blues Challenge in Memphis and won the Albert King Award for his outstanding guitar skills. After touring five years in his native country of Australia, he decided to take his music a different direction with his own band The Souldiggers in 1998. To date, he has been touring Australia, Europe, and the U.S. delivering his own brand of electric blues guitar. Geoff has also been working as a guitar instructor at the Fur Peace Ranch in Ohio with the support of the owner Jorma Kaukonen, former member of The Jefferson Airplane band and Hot Tuna.

His latest release is Little Big Man, features Geoff on vocals and guitar, Mal Logan on keyboards, Roger McLachlan on bass, Gerry Pantazis on drums, James Mack on percussion, and Nikki Nichols handling the backing vocals. Bonus tracks "Kerry Lou" and "Chance" feature the horn section of Paul Williamson on saxophone, Tibo Gyapjas on trumpet, and David Palmer on Trombone.  The album is like an expensive cocktail, blended with blues, jazz, funk, world, Latin, and soul and served as an addictive musical extravaganza to be enjoyed over and over again. This is some of the most eclectic music that I have had the pleasure to review. You will never hear the same guitar style on any two songs making him one of the most distinctive and creative guitar players in the business.  From the funky tune "Happening" to the burning blues number "Feel Like A King," this all-star band will take you on a journey that you can only hope will never end. "Never Give It Up" is a standout on the album with all the elements of Reggae, jazz, and funk.

Geoff Achison and the Souldiggers certainly are not afraid to break new ground, search for new avenues, and create original music all their own. Each song on Little Big Man flows flawlessly to the other with common treads weaving them all together into a musical masterpiece. This is a surprising good band that is definitely worth checking out.