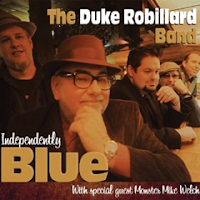 For over four decades, Duke Robillard has earned titles like teacher, guitarist, bandleader, songwriter, singer, producer, session musician, and blues advocate. His musical journey began in 1967 when he and Al Copley formed Roomful of Blues in Westerly, Rhode Island. The band was able to accompany their musical paragons Big Joe Turner and Eddie "Cleanhead" Vinson on record and in live shows.
When he left Roomful of Blues after 12 years, he worked with rockabilly king Robert Gordon, the Legendary Blues Band, the Fabulous Thunderbirds, Ronnie Earl, Jimmy Witherspoon, Tom Waits, Kansas City piano king Jay McShann, Billy Boy Arnold and Rosco Gordon, the Canadian band The Rockin’ Highliners, Dr. John, Maria Muldaur, and the jazz legend Herb Ellis. He also did studio work with Bob Dylan, Ruth Brown, Johnny Adams, John Hammond, Pinetop Perkins, and most recently with Sunny Crownover.
Joining Duke on his newest release are Monster Mike Welch on acoustic and electric guitars, Bruce Bears on piano, Brad Hallen on acoustic and electric bass, and Max Teixeira on drums and percussion, and the horns of Doug Woolverton and Billy Novick.
Independently Blue opens with two tunes "I Wouldn't-a Done That" and "Below Zero" that take advantage of the songwriting abilities of former Roomful of Blues band mate Al Basile. Duke delivers more a Jimmy Vaughan/Texas style guitar performance on "I Wouldn't-a Done That" and "Below Zero" that he co wrote with Basile. Mike Welch and Duke team up for a dynamic guitar duo heard throughout the CD especially on "Stapled to the Chicken’s Back," an instrumental written by Monster Mike Welch. To add a little variety, the band takes you down to the streets of New Orleans with the dixieland tune "Patrol Wagon Blues" recorded originally by Red Allen. The album takes yet another turn with the rock "n" roll fueled "Laurene."  The haunting, spiritual tune "Moongate," is another Robillard original inspired by a visit to a mysterious 19th century mansion in the Berkshire Mountains. Al Basile contributed yet another tune to the mix titled "I'm Still Laughing."  On the second instrumental "Strollin With Lowell and BB," Duke dazzles listeners with guitar styles similar to both blues guitar legends. Another original tune "You Won't Ever" features the superb trumpet solos of Doug Woolverton, reminiscent of the jazz fusion trumpet player Bill Chase. The sleepy, midnight jazz tune "This Man, This Monster," written by Mike Welch, features the rich sounds of both Mike and Duke on guitar. "Groovin' Slow" delivers once again, dueling guitar styles from Mike and Duke.  On the final tune "If this is Love," Duke regenerates that West Coast guitar sound created by Hollywood Fats and his Gibson guitar. Muddy Waters once told Duke Robillard "If I had you and Fats (Hollywood Fats) in my band I'd rule the world."

Few blues performers have had the good fortune to enjoy the career and work with the number of legendary performers that Duke Robillard has experienced. He seems to currently be at the pinnacle of his professional career. Independently Blue is a testament to that statement.