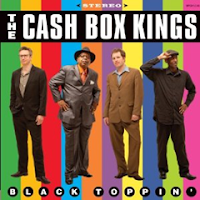 The Cash Box Kings have their new CD out and it is another superlative effort!  Here on their second Blind Pig release we have the boys giving us another great mix of new stuff and outstanding covers.  If it’s not their best effort yet it is damn close to it!

The cast of characters remains about the same, with regulars and guests doing what they do best- melding into a tight and focused CBK sound.  Sharing the duties up front are the steadfast duo of Joe Nosek, who also does all the harp work, and Oscar Wilson.  Nosek and Wilson contrast in styles in some ways, but both offer up an authentic Chicago sound.  Kenny “Beedy Eyes” Smith, Willie “Big Eyes” Smith’s son, shares the drum set with Mark Haines (who is on four tracks) and Alex hall (who is on one).  Joel Paterson takes lead guitar on all but one track where Billy Flynn fills in; Billy also backs Joel up on three more tracks.  Beau Sample is the bass player, but Gerry Hundt comes in for four cuts on bass along with rhythm guitar on 5 more and backing vocals on one of those.  Barrelhouse Chuck provided keyboards support on four tracks and Jerry Devivo is on sax for three cuts.

Ok, so now that all the personnel are identified, let’s get into the CD.  The Cash Box Kings under the “tutelage” of Blind Pig have really solidified the sound that I have appreciated from their earlier recordings and many live shows I have seen.  The songs they have presented here are right in their wheelhouse; nine new cuts and four great covers.  Less “country” blues are here than their first Blind Pig effort, but Nosek still gives us a little variety with the jumping,  swinging and rocking sounds at times that he does so well.  “I Don’t Want to Fight” and “Gimme Some of That” feature Joe on vocals and Joel picking out a jumping blues-swing-rocking sound.  Barrelhouse Chuck’s piano on the former and a little sax add nicely to the swinging arrangement while Nosek’s harp brings the latter firmly back to Chicago.

The covers are a very interesting assortment, especially the one that closes the CD.  “Run Run Run” is a 1967 Lou Reed cut that Nosek cleans up a bit from the old Velvet Underground production.  It has a cast of lyrical characters basically seeking their next heroin fix.  The backline beat and Patterson’s guitar swirl and create a mix of psychedelic blues and Nosek voice echoes as he sings about the Gypsy Death and all that the NY drug scene references.  He adds harp to the wild mix and the song fades to close in a driving vortex.  The other three covers are much more traditional and hearken back to the Delta and Chicago blues sound.  Jimmy Rogers’ “Money, Marbles and Chalk” is handled by Oscar on the vocals and Nosek’s harp, Flynn’s guitar and Chuck’s piano reek of a smoke-filled Southside club serving up hot blues back in the day.  Willie Dixon’s “Too Late” also features Wilson’s vocals and some beautiful overblown harp by Nosek. “Tom Cat Blues” takes us to the swamp.  I could almost feel the Spanish Moss growing on me as this slow blues sound wound its’ way through my system.

The CD opens with a jumping tune called “Blues Falling Down On Me” that opens with Patterson on guitar backed by Barrelhouse Chuck on organ.  After they grab you Nosek starts to sing and groan.   I was sold early on in this number, and then the solos started.  Patterson wails and Chuck pounds out the notes- a nice new cut!  They transition into Wilson on the title track, which has Oscar telling his friend a story about what he’s going to go out and do.  His ignorant friend doesn’t get it and it has to be explained to him that Wilson is sneaking out from his women to the other side of town to get what he needs.  Trying Really Hard(To Get Along With Youth” vocally has a little country influence, but it’s really blues that Nosek is doing and doing well.  The sax and guitar nicely take turns responding to Nosek’s lyrics.  “Oscar’s Jump” is a short and sweet ride and Devino’s sax is perhaps sweetest here.  Some Chuck Berry licks are snuck in, and Nosek blows some cool harp, but Wilson sells it with his strident vocals.   My Tinai” and “Hot Biscuit Baby” are straight up blues that Nosek and Wilson deliver up in the cool style we expect of the CBKs.  Great blues right out of the South Side!  Nice solos abound on guitar and harp.

The band has put together another superb album for their fans.  Anyone who had yet to sample the CBKs will instantly appreciate what these guys can do.  Their fans need to run out and get this because it is some great work that they deliver here for their listeners.  I loved this album from start to finish!  Most highly recommended!