Here I Am reviewed by Rick Davis 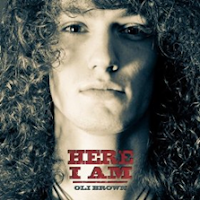 Oli Brown is establishing his presence with his third and newest CD Here I Am, available on Ruf Records. He is gaining popularity as a blues artist in both the UK and The United States. At the age of 13, he started playing guitar, with Jimi Hendrix as his major influence. Some of the other musical influences that helped him become established as a guitar player are Chris Cain, Albert Collins, Freddie King, B.B. King, Albert King, Hollywood Fats, Stevie Ray Vaughan, Tom Waits, Jon Cleary, Jonny Lang, The Big Pill, and Psychedelic Zombies.
It was during his visit to the US, that he got an explanation of the history and a grasp of the real meaning of the blues from Carl Gustafson and his band Blinddog Smokin'. Carl taught him the finer points of stage performance, soloing, and timing, all significant to the success Oli has experienced. He has already worked with blues artists young and old like Joe Bonamassa, Walter Trout, Robben Ford, Devon Allman as well as the legendary godfather of British blues John Mayall. Hailing from the UK, he joins the list of younger generation blues stars like Simon McBride, Matt Scofield, Ian Siegal, Erja Lyytinen, Aynsley Lister, Dana Fuchs, Samantha Fish, Dani Wilde, Ian Parker, TUF, and Jimmy Bowskill just to name a few. Included in his list of accolades, Oli was named 'Best Male Vocalist' and 'Best Young Artist' at the 2010 British Blues Awards and 'Best Band' and 'Best Album' for Heads I Win Tails You Lose at the 2011 British Blues Awards.
Here I Am, the latest release by the 22 year old, is successful in taking blues in an entirely direction, transforming traditional blues into more contemporary, cutting edge blues-rock. Joining forces with Oli Brown are Scott Barnes on bass, Wayne Proctor on drums and percussion, and Joel White on Hammond & Rhodes. The hard driven title track "Here I Am" emphatically establishes Oli's own identity as a blues-rock artist, with blistering guitar solos and convincing vocals. "Thinking About Her" continues with heavy guitar solos blended with a catchy 60s sounding chorus, making this tune and "I Love You More Than You Will Ever Know" made famous by Al Kooper, Donny Hathaway, and Blood, Sweat, and Tears, very strong tunes. "Manic Bloom" is typical of grunge or alternative rock launched by groups like Nirvana and Pearl Jam in the 1980s. "All We Had To Give" has a more traditional rock sound with a superb guitar introduction and follow-up guitar solos. "You Can Only Blame Yourself" and "Start It Again" demonstrates the intensity of Oli's vocals with "Start It Again" somewhat reminiscent of a rock 'n' roll Rolling Stones style tune. "Devil In Me" and "Mr. Wilson" deliver more of a traditional blues sound in both vocals and guitar solos. "Remedy," once again, could be a page out of the 60s classic rock era with explosive guitar solos. "Like a Feather," a staccato style tune, features Dani Wilde who supports Oli on vocals. The CD concludes with an up-tempo blues tune featuring guest harmonica player Paul Jones.
If you are looking for a very traditional style blues release, Here I Am does not fit that description. I feel it is a highly successful project that establishes Oli as a contemporary blues artist with mature vocals and a high-powered guitar. I really see blues moving in this direction in the future with some of the younger artists.