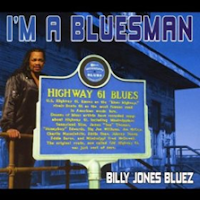 Billy Jones is a 49 year old bluesman from North Little Rock, AR.  He started his musical interest as a little boy playing with a toy plastic guitar his grandfather gave him.  Jones started playing real guitar by 5th or 6th grade and was accomplished enough by age 14 that he began playing gigs and traveling with other established musicians.  By his twenties he had his own band and played to troops at military installments in 42 states for nearly a decade.  His first album was released in 2004.  His second album, "My Hometown", released in 2007, was ranked #6 by Real Blues Magazine in their top 100 CDs list.

The musician some describe as reclusive does not have a lot of personal trivia available on the web. Jones has said he wants his blues to be modern enough to appeal to today's music listeners.  The album uses simple, street lyrics about growing up in the ghetto, the blues and love relationships.  Many of the tracks are layered with synthesizer special effects and backgrounds.   My favorite tracks are "The Iceman" with its boogie keyboards and Jones' vocals reminiscent of Jimi Hendrix and "Do Right Baby" also with boogie keyboards and nice guitar riffs.