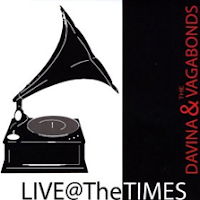 In opening her live performance at The Times Bar and Cafe in Minneapolis, Davina Sowers requests one thing from the audience and that is to just have fun. If you have ever had the pleasure of attending one of her live performances, you would know that this is a very simple request. It is nearly impossible to refrain from enjoying yourself if you are a fan of music from early vaudeville, blues, or New Orleans jazz. With her unique vocals Davina, has been able to revive the magic of the early New Orleans jazz of the 20s and Chicago jump blues of the 40s and 50s. Names like LaVern Baker, Ella Mae Morse, and Big Bertha Henderson were displayed on billboards during that bygone era. Those early New Orleans groups like The Chicago Footwarmers and Sam Morgan's Jazz Band have also been resurrected by Davina and The Vagabonds. Davina's vocals has been compared to the vocals of the late Amy Winehouse.

She opens the with the Mike Jackson / Andy Razaf cover tune "Knock Me a Kiss" from the 40s. Whether sung by the lovely Miss Davina Sowers, Ella Fitzgerald, or the classic version done by Louis Jordan, hearing it live will put a smile on your face. She adds her own song writing skills to the first set with her own tunes "Pushpin," "Death," and "St. Michael vs. The Devil." She covers the Bessie Smith blues tune "Muddy Water" written by Peter DeRose, Harry Richman, and Jo Trent. She is very creative with her arrangement of the traditional song "This Little Light of Mine." Also included in the first set are the John Sebastian hit "DayDream" and the Bob Dylan tune "Watching The River Flow" with backing vocals from the band on the Dylan tune. The Jessica Hoop folk song "Big Fish" is done New Orleans style and the Earl Hines/Sid Robin "Monday Date" will give you a full blast of Dixieland jazz, once again with help on vocals from her band. She completes the first set with the soulful R&B tune "The Clock" written by George Sueref and performed originally by Little George Sueref & The Blue Stars.

The second live set opens with the originals "Love" and Hate." They follow up with the tune "No Buts, No Maybes" by New Orleans pianist Henry Roeland "Professor Longhair" Byrd. Songwriters Gus Kahn, Fabian Andre, and Wilber Schwandt created the tune "Dream A Little Dream Of Me" done superbly by Davina with Zach Lozier on trumpet, joining a host of earlier artists like Ella Fitzgerald/Louis Armstrong and Mama Cass Elliot. The next tune "Put A Lid On It," which is perfect material for the Charleston in the roaring twenties, was written by Thomas Maxwell of the Squirrel Nut Zippers in 1996. "I'm Gonna Be A Wheel Some Day," a popular song written by Roy Hayes, Fats Domino, and Dave Bartholomew, is cause for celebration by the band. Another tune "Honey Pie," written by Lennon/McCartney and done originally by Paul McCartney, is done 20s style by Davina and The Vagabonds. The band struts with the famous Joe Primrose New Orleans funeral march "St. James Infirmary" and Chuck Berry's "Back To Memphis." The next original tune "Under Lock And Key" is the title track from an earlier Davina and The Vagabonds album. Davina concludes the show with another original tune "Finally Home" after a short introduction to the song.

Davina and The Vagabonds is like a modern day New Orleans preservation hall band performing in a flashy 20s Vaudeville nightclub show. They have been described as a combination of blues, American roots, and New Orleans music. This double live CD set will give you a taste of this unique Minneapolis band taking the Midwest by storm. After listening to their live show, you are certain to seek out a concert near your hometown.