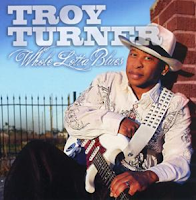 The latest album Whole Lotta Blues from guitarist and vocalist Troy Turner is highly reminiscent of the work of another Louisiana-blues swamp rocker, Kenny Neal. The two are good friends, have toured together, and Turner has done a lot of work with other members of the Neal entourage. However, Turner has got his own energetic blues/rock style that can be heard throughout this masterful blues CD.

Louisiana-born and raised, Troy Turner is a relatively young 42, but he's been creating a name for himself in the blues world for a couple of decades now as a tough guitar slinger. He recorded a couple of albums in the early '90s, then one in 1999 "Blues On My Back" for Telarc. Then he stopped recording until now, but toured it seems non-stop during the last decade.

Turner opens with the title track "Whole Lotta Blues" smokin' on guitar. "Come To Your Senses" features Leslie West and Steve Cropper on guitars with Reese Wynans on keyboards and the smooth vocals of Turner. "Out On The Street" portrays the life of the destitute out on the street. "Note Ready" is a sensational duet with Jonell Mosser one of the best blues female vocalists that I have heard to date. "Foolin Yourself" features Steve Cropper on guitar and Felix Cavaliere on piano. "Fired On A Thursday", co-written by Hubert Sumlin and Jon and Sally Tiven portrays life at the bottom of the ladder. "Goin Fishin" and "Never Too Big For The Blues" really show the versatility and experience of Troy Turner. The Nix track, "Goin' Down," is an especially high energy number, with the high-spirited piano of Max Middleton, backup vocals by Bonnie Bramlett, Leslie West, Brian May, and Audley Freed on guitars, and Bobby Whitlock on organ. Following, a mellow "Don't Push Your Luck" and the up beat "Short Changed", Troy's musicianship on guitar once again is showcased along with the harp of Mason Casey. The Franken contribution, called "Blue-Haired Woman," written with Jon and Sally Tiven is a fine satiric little tribute to women of the golden age. The pair of down home blues that wrap up the CD are "One Way Ticket" and "Brand New Cadillac", both including Hubert Sumlin as co-writer.

This contemporary blues CD brings in rock and a distinctive Louisiana style blues and will keep your keep your mojo workin' throughout. This collection is a keeper!
Posted by Crossroads Blues Society at 10:07 AM