Have Blues Will Travel reviewed by Rick Davis 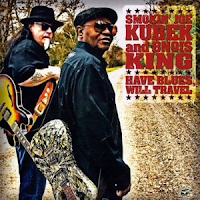 Growing up in the Dallas area, Smokin' Joe Kubek began playing in clubs at the age of 14. Influenced by Eric Clapton and Peter Green, he became interested in blues music and formed his first band. Shortly after, he played rhythm guitar with Freddie King until his death in 1976. He then recorded and performed with several artists before teaming up with singer/guitarist Bnois King, from Monroe, Louisiana, whose soulful vocals and jazz guitar style contrasted well with Kubek's more obtrusive finger and slide guitar techniques. Kubek, with his substantial arsenal of instruments, effects, and techniques, delivers a blues/rock guitar display that is tempered by the remarkable accompaniment of Bnois King's jazz influenced guitar. Kubek, coming from the Texas blues/rock background after playing with Stevie Ray Vaughan, Albert King, Freddie King, and B.B. King, found Bnois King's smooth jazz guitar style a perfect complement to his technique. The combination just clicked with their seamless mesh of styles. Together this dynamic duo has recorded 13 Records.

Have Blues, Will Travel, their most recent release, is a magnificent collection of Texas roadhouse blues tunes, opening with the title track "Have Blues Will Travel", a blues number with a driving beat and a combination of Kubek's blistering blues/rock and intense slide guitar styles. The cd continues with pair of well executed numbers "Got You Out Of My Blood" and "Out of Body, Out of Mind" showing how well this duo compliments each other. The fourth tune "RU4 Real?", opens with a John Lee Hooker style continuing with Kubek taking charge with an intense solo, and continuing with a steady rhythm as King belts out lyrics about his latest female acquaintance. Kubek opens "Payday In America" with quite a slide introduction and continues that style throughout. "Shadows In The Night" opens with a very haunting, lonely guitar introduction and continues with a similar style, creating one of the best ballads on the cd. The shuffle, "My Space Or Yours", incorporates the concept of technology and blues well. Kubek runs the fretboard on "Sleeping With One Eye Open" like only he can. "My Guitar" has a good mix of slide and rhythm combined with King's lyrics about the love of his guitar. "One Step At A Time" creates that Texas growl that only Smokin' Joe can create as he breaks away on solos. Once again the duo opens with a sultry ballad "Wishful Thinking" as Kubek's lonely slide guitar echoes out in the studio along with King's penetrating vocals, making this one of premier numbers on the cd. The dynamic duo completes this collection with "What A Sight To See", a steady rockin' display of talent from both Bnois and Smokin' Joe.

With Have Blues, Will Travel, Smokin' Joe Kubek & Bnois King move forward as they complete a fiery roadhouse style blues album delivered well as a result of their superb musicianship. King calls the collaboration one the best to date.
Posted by Crossroads Blues Society at 8:25 AM