Stand Together reviewed by Harmonica Joe 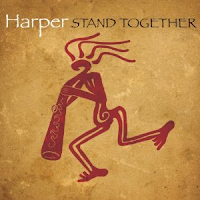 Blind Pig Record’s release of Harper’s new CD, “Stand Together”, is unique to say the least. This is one different recording for me. This is his first release with his touring band, Midwest Kind, from Michigan. The album was self- produced by Peter D. Harper.

Harper is a fine songwriter, imaginative harmonica player and capable vocalist. With the addition of an Australian didgeridoo, some ear grabbing percussion background and a backing band we have a good line up for this music project. This recording is Harper’s third CD for Blind Pig Records.

“Stand Together” is Harper’s first recording that includes his touring band, Midwest Kind. This band is very capable of adding to and backing up Harper’s abilities. The standard band instruments, guitars, bass, organs, piano and some awesome percussion work are all a fine compliment to Harper’s vocals, harmonica skills and the captivating sounds of the didgeridoo (I just like that word).

Harper’s lyric writing skills are very apparent in all 12 songs on the record. His songs with titles such as “Love=Peace=Freedom”, “We Stand Together”, “You Know What You Got” and “Not My Brother” just let you know that Harper deals with real social issues.

“Weaker Man” is one my favorite tracks on “Stand Together”. Harper’s harp playing stands out for me on this tune. His style, to me, is John Popper based with real blues licks laced in. The low dull continuous humming of the didgeridoo is almost haunting.

I have had a hard time reviewing Harper’s “Stand Together” as a true blues recording. Saying that, I also have to say that, to me, this is a very good recording project. I enjoy the whole concept of Harper’s blending of rock, World music, roots, blues harmonica, the didgeridoo, some awesome percussions and a great backing band on this CD. The Harper’s uniqueness in his approach to music is very refreshing and is a step to blending music across the World together. You can check out more info on Harper at www.harper.biz.
Posted by Crossroads Blues Society at 8:54 AM