The Life I Love reviewed by Harmolnica Joe 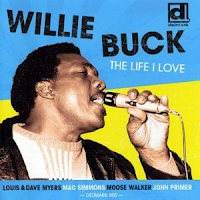 Delmark Records has done it again. They have just re-released another great blues album. Willie Buck’s limited edition album that was released in 1982 as “I Wanna To Be Loved” is out now out as a CD, “The Life I Love”. At the time of the albums release it was made up of 12 tracks. Now 5 live tracks have been added to it making it one heck of a CD.

Willie Buck, was born William Crawford in Houston, Mississippi, in 1937. For over forty years he has been belting out true blues lyrics and leading his own blues bands. Willie is still active singing the blues in the Chicago blues scene. It is a shame that this recording, “The Life I Love” is his only CD. Backing Willie Buck’s vocals for this recording is a mighty talented band. On guitars we have Louis Myers plus John Primer on 2nd guitar. This was one of Primer’s first recorded performances. Playing harmonica is Little Mac Simmons with Dime-Store Fred added to most tracks. Dave Myers handles the bass line and Jerry Myers brings on the drums. We also have Big Moose Walker doing a fine job on the keyboards.

Right from the start of this CD I knew that I was going to be listening to some great blues. The first track is Muddy Waters’ “She’s All Right”. Willie Buck does an awesome job on this tune. He is one outstanding blues vocalist. This sets the stage for the rest of the CD.

Of the 17 tracks on this recording Willie Buck wrote two of them, “How Can I Be Nice To You” and “There’s A Time”. The rest of the songs are a great mix of blues tunes by Willie Dixon, Walter Jacobs, James Oden, Muddy Waters and Bernard Roth. Willie brings his own vocal quality to all of them and is not just a copy- cat vocalist.

“How Can I Be Nice To You” is a straight out blues tune. It contains great lyrics, the addition of Little Mac Simmons’ awesome, never over played, harmonica, and a very solid band behind him. John Primer and Louis Meyers on guitar, Big Moose Walker on keyboard, Dave Meyers on bass and Jerry Porter on drums make up the band. This is a great mix of players.

James Oden’s tune “Nineteen Years Old” is a fine blues tune to show off Willie’s vocals. With John Primer adding his slide guitar solos, a solid harmonica line, and Big Moose Walker on the keyboard this becomes one of my favorite tunes of the CD. The last five tunes added to the recording were live performances made up of the same players but with Jodie North on the drums. These tunes may not be of the best recording quality but they a good addition to the project. It is all an added bonus.

Willie Buck will be with us for a long time with the release of “The Life I Love”. This is one blues CD that you will want to listen to many times over. Thanks to Delmark for keeping blues history alive!
Posted by Crossroads Blues Society at 8:17 AM