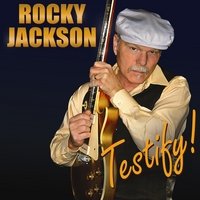 Originally from Texas, guitarist Rocky Jackson has been plying his trade in the L.A. area for the last 30 years. After a lengthy stint as a member of the Magic Blues Band, he has fronted his own band, the Igniters, and released several recordings. His newest project features eight original tunes and five covers that are associated with some of Jackson’s major blues influences. Backed is supplied by his regular band consisting of Eliot Witherspoon on drums and Joel T. Johnson on bass guitar. Michael Fell adds harmonica to five tracks and Hank Van Sickle takes over on bass on one cut.

As a songwriter, Jackson manages to avoid pitfalls like simplistic lyrics and over-used chord progressions to fashion a strong batch of tunes. “Voodoo Spell” describes an enchanting woman who brought the author to his knees. He praises his woman on “I Wanna Testify (About My Baby)”, a shuffle with Jackson showcasing his soulful voice. “Shoulda Never Left Texas” is a slow blues track that gives Jackson plenty of space for his dynamic guitar work. Another highlight is the acoustic “Chicken-Legged Woman”, with Jackson playing solo with two different guitars on separate tracks in support of his gritty vocal. He adopts a heavier beat for “In the Doghouse Now”, which is reminiscent of material cut early in Johnny Winter’s career.

“I Just Want to Make Love to You” opens the disc with Jackson singing with a raw edge but the cut fails to excite despite some strong guitar work. His version of “Stop Breakin’ Down” fares better with Jackson’s slide guitar playing off Fell’s full harmonica tones. Another cover, “Early in the Morning”, finds Jackson paying tribute to the Chicago blues tradition with Fell wailing away on the harp. The band rocks hard on Jimmy Reed’s “Don’t Say Nothin’ ” while Jackson and Fell both shine once again on “Long Distance Call”, with some quality slide guitar from Jackson.

The disc closes with a slide guitar rave-up on “L.A. to Austin” as Jackson shouts out the description of the trials and tribulations of a road trip back home. It is an apt ending for a recording that doesn’t offer any revelations other than the fact that Rocky Jackson is a talented and versatile musician. He has crafted a solid disc that impresses with his talent as a guitarist and singer on a diverse program that holds your attention as it blends the boogie roots from Texas and the electric Chicago style. Guitar fans will certainly find plenty to appreciate !!!
Posted by Crossroads Blues Society at 9:02 AM