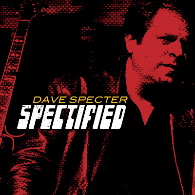 Spectified
Dave Specter
Fret12 Productions, LLC
www.davespecter.com
13 tracks/72:32
In recent years there has been a resurgence of recordings that feature only instrumental tunes.  Two of the best in this genre are guitarists Ronnie Earl and newcomer Matthew Stubbs. The lack of a vocalist means the musicians better have their chops together as there is no room to hide. And you need a diverse program of strong material that won’t allow the listener’s attention to wane throughout the recording. The latest from Chicago guitarist Dave Specter easily fulfills both of these criteria with the first release on his own label. Specter had eight previous recordings on Delmark Records, including the all-instrumental Speculatin’ from ten years ago. His work has always been a rich blend of blues, jazz and soul elements expertly rendered by some of the best musicians in the Chicago blues community.
Joining Specter on this project are the veterans Brother John Kattke on keyboards, Harlan Terson on bass and Greg Wyser-Pratte on drums and percussion; Pete Benson on organ, Victor Garcia on percussion and the Bo’ Weavil Brass also fill in.
The disc opens “Stick to the Hip” with Kattke laying down some thick chords on the organ as Specter memorable a memorable guitar part while the horn section riffs in the background.  “The Funky Hunky” is in the same vein, sporting a strutting rhythm line and more clean picking from Specter. The band really shines a stellar run-through of the King Curtis classic “Soul Serenade”. Specter’s solo is a thing of beauty as he slowly turns the heat up, reaching a cathartic ending flurry before Katz restores calm with a mellow organ solo.
Specter shows his versatility on “Blues Call” , which conjures up reminders of the 50’s era records that renowned jazz guitarist Kenny Burrell did for Blue Note Records. Specter’s guitar work always manages to find a balance between the concise precision of his playing and his ability to elicit an emotional reaction with his instrument. Equally fine is the interpretation of Ma Rainey’s “See See Rider” with Kattke on piano nearly stealing solo honors from Specter. “Rhumba & Tonic” provides a change of pace with David Hidalgo of Los Lobos adding his accordion to the mix.
The disc has two takes of the song “Alley Walk”. The electric version sports a wicked guitar tone and finds Specter switching to slide guitar half way through the track. The acoustic rendition is a fitting closing track, just Specter and his guitar spinning out more musical magic.
Throughout Specter’s recording career, he has managed to maintain a high level of quality in his work. This release raises the bar even higher. Specter rarely gets mentioned when discussions are held about the best of the current Chicago blues guitar players. Hopefully that will change when people get a chance to listen to what very well could be the crowning achievement in his career up to this point.
Reviewed by Mark Thompson
Posted by Crossroads Blues Society at 9:56 PM

Thanks for the great review.
Glad you enjoyed Spectified.
Correction: Fret12 is not my own label.
The reviewer also mistakenly referred to Brother John Kattke as "Katz" when describing his solo on Soul Serenade.