I Like It a Lot reviewed by Mark Thompson 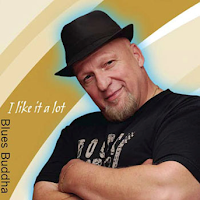 Blues Buddha
Stoopid Daddy Records, Ltd.
www.bluesbuddha.com
10 tracks/35:05
Tommy Dudley, alias the Blues Buddha, hails from the metro New York area. From the sound of this recording, listeners in that area should be glad that this energetic singer is plying his trade in their backyard. Dudley has a brawny voice with a powerful, rich tone that dominates the proceedings. He doesn't need to push his voice as it naturally seems to fill the room.
The instrumental backing comes from a roster of musicians that changes from track to track. The one constant is producer Scott Stanton, who supplies all of the keyboard parts as well as guitar or bass on several cuts. Stanton also co-wrote six songs with Dudley and another with guitarist Denny Leroux. He gets all of the credit for “Give and Take” while Leroux is the sole writer of the remaining two tracks.
The disc is full of swinging beats and easy-on-the-ears tunes that mostly examine the downhearted aspects of love, as exemplified on “Break My Heart”. Dudley takes his time describing a new relationship that will no doubt end badly for him. On “Better at Hello”, Dudley sings with a harder edge as he apologizes for leaving after at a night of passion. Dudley really cuts loose on “Don't Worry”, shouting and whooping over the driving beat while Hank Logan adds some honking saxophone. The best example of the Blues Buddha's vocal talents can be found on “Trouble”. Accompanied by Staton's barrel-house piano and bass, Dudley is in complete control, singing with an unhurried ease that contrasts with his tale of constant personal misfortune. Another highlight is “Low Cotton”, a low-down blues that closes the disc with another hard-edge vocal from Dudley while Ronnie Mirro and Matt Rae trade guitar licks.
A couple of tracks come up a bit short. “Buddha Boogie” is a jumpin' theme song musically but the lyrics are light-weight compared the rest of the disc. The same is true for “I Like it a Lot”, the requisite up-tempo boogie number. And the playing time is a bit short by today's standards. But overall, the Blues Buddha and his friends come through with enough good stuff to make this one a worthy listen. There's no doubt that Dudley has the kind of voice that command's your attention – and I'm willing to bet that is really true in his live performances.  Go to www.cdbaby.com to sample tracks on this release.
Reviewed by Mark Thompson
Posted by Crossroads Blues Society at 9:51 PM