Heads I Win, Tails You Lose reviewed by Mark Thompson 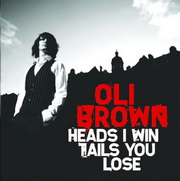 Heads I Win, Tails You Lose
Oli Brown
Ruf Records
www.olibrownband.co.uk
12 tracks/52:50
It seems like we are always searching for the next “big thing”. The pop music scene is dominated by the latest, who offer little new despite the blitz of media frenzy. In fact, a closer look reveals that many lack the talent and skill that is require to remain in the spotlight. Even the blues community has its moments of heaping praise on a young musician who has been anointed as the latest savior who will draw new listeners to the music like lemmings to the sea. Remember all of the hype some years ago about Jonny Lang, who eventually drifted away from blues as he followed his own musical muse.
Oli Brown is the latest wunderkind to be offered up for our consideration. He is a nineteen year-old singer and guitarist from England who also displays a impressive knack for songwriting. His first recording, Open Road, was released in 2008 and created quite an impression with legendary producer Mike Vernon, who came out of retirement  to work here.
Brown opens with a furious shuffle, “Evil Soul”, fueled by the solid rhythm section of Gary Rackham on bass and Jamie Little on drums. His rousing vocal tells the tale of a mistreating woman, punctuated by a knuckle-busting guitar solo. The female troubles continue on “Makes Me Wonder”, as Brown contemplates finding a new companion who will appreciate him. Next, the band adopts a heavier beat with a funk element for “Keeping My Options Open”. The classic “Fever” gets a fairly straight-forward run-through spiced up by band member Dave Lennox on the organ. “I Can Make Your Day” finds Brown in the role of a self-assured back-door man, with ominous accompaniment from the band.
Another highlight is “Speechless”, a rock ballad with a catchy vocal hook that Brown delivers with the utmost sincerity. Even better is the slow blues track “Not a Word I Say”, with Brown delivering his most impressive vocal and a guitar solo that steadily builds before erupting in a flurry of notes followed immediately by Brown's anguished cries.
The second half of the disc doesn't quite match the impact of the first seven cuts. A couple of songs suffer from weak lyric content and  “No Diggity” finds Brown adding some hip-hop influences in his treatment of an obscure cut from the group Blackstreet. But when he slows the pace on “Love's Gone Cold”, Brown once again delivers a wrenching vocal performance and a searing guitar solo.
There is no question that Oli Brown is a very talented performer. He is a very adept songwriter, a skill that is needed to keep the music relevant and vibrant. His guitar playing and singing display a maturity that is rare in his age group and makes it easy to understand why the Mike Vernon was compelled to work with Brown, One thing you can count on – you will being hearing more from Oli Brown in the future.
Reviewed by Mark Thompson
Posted by Crossroads Blues Society at 9:59 PM