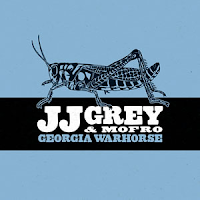 Georgia Warhorse
JJ Grey & Mofro
Alligator Records
www.jjgrey.com
11 tracks/53:02
With their first release nine years ago, Mofro introduced their unique sound to the world. It was a heady blend of funkiness nurtured in the Florida swamps combined with blues and southern rock influences. The band’s earthy approach attracted attention worldwide, seemingly keeping the band on a perpetual tour. When they changed labels in 2006 from Fog City Records to Alligator, JJ Grey’s name was highlighted to reflect his stature as the band’s driving force and principal songwriter.
His long-time collaborator, guitarist Daryl Hance, continued to be an integral part of Mofro on the first two Alligator releases but his name is missing from the credits for the latest recording, leaving Grey as the lone original member. Dan Prothero, head of Fog City Records, continues his streak as the band’s only producer. In the liner notes, Grey sings the praises of engineer Jim Devito and his Restrophonics Studio, the only facility that Grey has recorded in. And the results speak for themselves as both men are definitely attuned to sound that Grey is trying to capture.
Listen to the rhythmic pulse and taut guitar riff on “The Hottest Spot in Hell”. Chris von Sneidern on percussion sets a relentless pace behind Grey, who dials back the vocal intensity due to surging force generated by the band. The closing track follows, with Grey unleashing his magnificent voice on “Lullaby” with guest Derek Trucks adding a tortured slide guitar part to the proceedings. The title track is another highlight, with a sound like the Lowell George-era Little Feat. It refers to the nickname for a tough grasshopper that has qualities Grey sees in himself. “All” features an excited vocal by Grey and magnificent drumming from Anthony Cole.
Grey’s acoustic guitar is featured on the arrangement for “Hide & Seek” along with his patented soulful singing. Cushioned by a horn section on “The Sweetest Thing”, famed reggae artist Toots Hibbert joins Grey, setting up a vocal exchange that ends in a draw as each singer turns in a colorful performance. “King Hummingbird” tackles the quest of a man seeking redemption. The track steadily grows in power until Grey cries out in agony, seeking forgiveness. “Slow, Hot & Sweaty” is an apt title for a piece that could easily fill any dance floor in the country with its grinding rhythm. The track also brings to light maybe the only weakness of the project. Grey occasionally falls victim to using a certain snippet of lyrics repeatedly in a song, which detracts from the solid musical foundation on every cut.
Grey handles all of the vocal and remaining guitar parts in addition to playing piano, synthesizer, clavinet, talkbox and harmonica. Additional band members include Andrew Rube on bass and lap steel guitar, Anthony Farrell on keyboards, Art Edmaistron on tenor saxophone, Dennis Marion on trumpet and Adam Scone, who brightens several tracks with his Hammond B3 organ. Together they energize Grey’s deeply personal compositions that take an unwavering glimpse of the world with all of its joy and pain, emotions that are expressed in Grey’s fervent singing. If you haven’t checked out any of the previous releases, make sure you give Georgia Warhorse a thorough listen so that you will no longer be deprived of the many savory moments served up by JJ Grey & Mofro.
Reviewed by Mark Thompson
Posted by Crossroads Blues Society at 10:19 PM