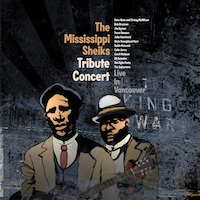 Live in Vancouver
The Mississippi Sheiks Tribute Concert
Black Hen Music
www.blackhen
music.com
DVD with 14 tracks
Steve Dawson produced and recorded a critically acclaimed Mississippi Sheiks tribute on CD in fall of 2009.  He wanted to create a live experience in Vancouver with the same artists and over two days this past March he did two shows, the second of  which resulted in this DVD.   What he got was truly spectacular.  There was a true chemistry developed between the artists and the result goes down in the annals of great live musical events.  The bluesy, folksy, down home approach of the artists is truly authentic and real.  The introductory and background material presented gives us some history and places the music and efforts in perspective.  If I had any criticism it would be that they need to take these shows on the road for all to see and hear!
I think this album/DVD warrants a full accounting of the performances, so here we go!  After introductory material Jim Byrnes with string backup reads original Sheiks liner notes and some history of the family.  Canadian singer Oh Susanna does the first song, “Things About Comin’ My Way”.  Her warm and sultry tones and easy approach to song and Dawson’s solo slide really sell this one.  The gospel men the Sojourners’ “Sweet Maggie” rendition is ebullient and upbeat; Dawson’s pedal steel is beautiful and Daniel Lapp delivers a nice little trumpet solo in support of this fine trio.  The great Geoff Muldaur is up next with “Poor Boy”.  His banjo and singing are right out of the Delta.  Backed up by some nice mandolin and strings, we get the feeling we are on a warm porch in Mississippi on a summer afternoon.  Dawson gives us “Gulf Coast Bay” next, playing his lap guitar and droning out a haunting and traditional melody oh so well with some excellent B3 licks by Wayne Horvitz and Lapp on trumpet.
Colin James does “Keep On Tryin’” and is backed by John Hammond on harp; well done!  New York born guitar player Bob Brozman plays some mean slide National steel guitar on “Church Bell Blues” as he wails and moans out the lyrics to this old classic. He’s been beating those steel boxes oh so well since he was six years old! Van Dyke Parks on piano leads us through “It’s Backfirin’ Now”, telling us the story of an old car’s maladies.  The Lapp trumpet solo and backup is excellent again here.  Robin Holcomb’s haunting vocals’ flutter in a gritty yet sweet manner and please the listener with “I’ve Got Blood in My Eyes for You”.  Byrnes in “Tell Me What the Cats Are Fighting About” with Hammond squeaking out some high notes on harp is just marvelous.
Alvin Youngblood Hart is next up with “Livin’ In A Strain” with lap steel in hand, or more accurately, on his lap I guess.  He gives us a very down home performance and Dawson fills in with some nice slide work of his own. “Kind Treatment” is sung by John Hammond, who also plays acoustic guitar and harp.  It’s another of the many tracks that makes us feel like we could shut our eyes and be instantly  transported to a front porch in Mississippi.  Dave Alvin and Christy McWilson on “Who’s Been Here” give us a beautiful duet.  Brozman on guitar, Dawson on banjo and Lapp on fiddle give good solos in support.  The DVD ends with a jamboree of all the artists doing “Sitting On Top Of The World”.  It’s a great finale to a truly great body of music presented by the accumulated artists.
If I had to choose the 2009 CD or the 2010 DVD I’d have to pick the DVD, although both are superb.  The electricity and interplay between the artists is a beautiful thing to hear and see.  Any fan of blues and folk music must have this as part of their collection!
Reviewed by Steve Jones
Posted by Crossroads Blues Society at 10:03 PM