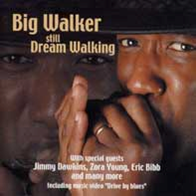 Still Dream Walking
Big Walker
Self produced
15 tracks/62:03
Big Walker, Derrick Roy Michael Walker, is a singer, songwriter, harmonica and sax player born in Oklahoma.  He spent time in San Francisco, and now resides in Denmark. This release is a reissue (with bonus tracks) from his earlier Dream Walking album. The bad news here is that Walker’s vocals and sax playing are only so so, and his harmonica playing is pretty good. What Walker really brings to the blues party is his songwriting. No subject is verboten, nor too “gooey.“ “My Favourite (his spelling) Tree” is a “Spill The Wine” talk/song about his love of a tree and how it might feel to be that tree and someone wanted to chop YOU down. “I Don’t Want To See” is a song about television violence. He doesn’t want to see it on his TV. “Drive-by Blues” is, yes, about street violence, not a blues hit-and-run. Included on the CD is a video of this cut. As you can see, Walker is not afraid to take thematic chances which might label him a softy in these days of super baaaad street cred.  Musically, there are a lot of borrowed riffs here: you’ll think Howlin Wolf, or Roscoe Gordon, or whomever, but the playing overall is tight and listenable. Besides his mostly Danish band, guests include Zora Young, Jimmy Dawkins,  and Eric Bibb. The title track is maybe the best, to me with its “Smoke-stack Lightening” feel and funky guitar via Brain Kramer. Zora Young adds an almost Keith Richards-like, Stonesish response to Walker’s “Open Book.” Young take lead vocals for Walker’s “I Knew The First Time,” allowing him to play sax. More commonplace tunes include “I Need My Prescription Filled,” “Boogie Woogie Nighthawk,” “I’m Gonna Write A Letter,” and the acoustic ending song, “Where Shall I Be?” an Eric Bibb/Big Walker acoustic duo.
“Still Dream Walking” might not be appeal to super serious blues fans, but there is a lot going on here. Walkers subject matter is unique; his band cooks when it needs to (see “Boogie Woogie Nighthawk“),  and his stance against violence is refreshing. Maybe not a must buy for many, SDW  might help round out the collections of harp fans and modern day aficionados of quirky blues songs.
Reviewed b David Stine
Posted by Crossroads Blues Society at 9:52 PM