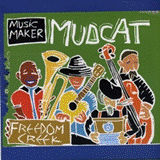 I was driving home one day and Mudcat was on Sirius/XM radio’s BB King’s Bluesville. I was intrigued by his vocals and made a mental note to find out more about him. Our next Crossroads Blues Society meeting was the next day, and one of the newly arrived CDs was this one so destiny, déjà vu or whatever it was forced me to volunteer to review this CD. I’m very glad I did.

Danny "Mudcat" Dudeck is a mainstay on the live Atlanta music scene. His and the band’s blend of Piedmont blues, gospel, bawdy humor and just great musicianship make for quite the fun listen. This, his ninth release, features Danny with three buddies recorded (as Tim Duffy notes on the CD) “one fine summer morning in the hills of Carolina.” Dave Roth on standup bass, Eskil Wetterqvist on drums and Lil’ Joe Burton on trombone along with Dudeck serve up a creative mix of traditional and original acoustic songs. Tim Duffy at MMRF has put together a fine little CD here with Mudcat and his buddies that every fan of acoustic blues needs to hear.

The title track starts off the CD. Mudcat’s busking style and slide work get the listener engrossed at the onset and take them for an enjoyable ride. Burto’s trombone adds a unique and very cool punctuation to the songs. He opens the next song “San Antone” with a burst and then Dudeck gets into a lilting melody. Dudeck wails in the chorus, “Somehow how tequila proceeded before my eyes open, and my mind blown again”, giving us an interesting visual image. He continues on the heavy drinking them even more in the next cut, “Empty Room Blues”, were he grunts and groans over an impressive guitar picking solo. In “I Want to Know” an uncredited gospel group with piano backs up Dudeck. He and the singers give a gut wrenching performance; Burton wails on his solo, too.

They go into some old fashioned bawdy humor with double entendres, unfinished lines and then obvious rhyming lines (usually quite dirty). “Big Bamboo” sings about how the plant pleases “one and all” in a variety of double entendres. In “Red Light” they get even more down and dirty with their unfinished thoughts. “Peter Rumpkin” continues in that vein a few tracks later. “Rattlesnake” again uses the double entendre. These cuts are both funny and musically well done.

A cool cover of James Brown’s “Try Me” gets respectfully done acoustically with some harmonies by the band members adding to Mudcat’s vocals. Another strong trombone solo further sells this one. “I Want to Know” and “Keep On the Sunny Side” are two other covers given a good treatment.

I thoroughly enjoyed this album. Mudcat’s vocals are gritty and strong, his slide work and guitar picking is great and his band is equally up to the task of delivering strong perfromances. Roth and Wetterqvist are solid backbones to this effort and Lil’s Joe adds so much with his trombone work. These guys would be a blast to see live but until you can do that I recommend listening to this album!