The Fight is On reviewed by Rick Davis 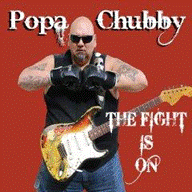 From his early hit "Sweet Goddess of Love and Beer" to his Hendrix influenced "Electric Chubbyland", Popa Chubby's career has spanned over ten years with his latest cd being the first in almost two years. Born Ted Horowitz in the Big Apple, he was influenced by the sixties rock and R&B played on the juke box in his parent's candy store. Poppa Chubby made the statement "When I first heard Freddie King my world was turned upside down".

The Fight Is On is the latest release on Blind Pig Records by the blues rock star. He opens the title track with the roar of his guitar and the sound of his booming vocals as a tribute to many fighters who have entered the ring to take on their opponents. He charges right into "We Got Some Rocking To Do" never slowing a bit from the the opening line to the end with guitar and vocals blazing away. "Another Ten Years" is a rockin' tribute to the fallen rock and blues artists over the past ten years including Hendrix, Lennon, SRV, and Willie Dixon done with an Allman Brothers guitar style. "The Right Time" focuses on Popa Chubby's masterful guitar work using a wah wah pedal through out the number. He keeps rock n' roll alive with "Rock And Roll Is My Religion" and a live recording of Motorheads "Ace of Spades". The cd kicks into overdrive with "The Conpany of Thieves" followed by a ballad style number "Switchblade Combs And Candy Cigarettes". The energy level increases two fold with his blues guitar explosion "Noisemaking Love Machine" and the instrumental "Steelhorse Serenade". Poppa Chubby completes this collection of high energy numbers with the hard drivin' "It's Over" a Tom Principato guitar style original about "Wicked Wanda".

If you have been a Popa Chubby fan, you need to add this one to your collection. This is raw electric energized rock and blues from start to finish.

Reviewed by Rick Davis
Posted by Crossroads Blues Society at 11:56 AM