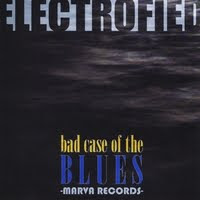 I got this pair of CDs in the mail together from Tony Fazio. These two CDs feature this Washington, DC based guitar player and also feature Charlie Sayles on harp. Scott Taylor provides vocals on the former while Charlie Sayles sings on the latter. The songs on both are original, written by Fazio, Sayles and the other band members. Fazio plays a thoughtful and well mannered guitar, laying out beautiful licks all over the place. Sayles’ harp and vocals are down and dirty traditional blues. Taylor’s vocals are soulful and a little more poised. The quality of the Electrofied studio recording is much better than the live performances. The live CD is pretty much cuts taken from club dates without the luxury of a high quality recorder, but they still give the listener a good idea that these guys can sing and play.

With the exception of Sayles, these are young guys who have produced their second album and they’ve done a great job. The music is a blend of blues, jazz, R&B, and a little gospel. I think I was most impressed with Fazio’s guitar work, but the vocals by Taylor and the backline of Bob Rusteburg and Richard James Burgess are equally solid. “Bad Case of the Blues” is a well done set of tracks delivered in great form. Charlie Sayles has been around the pond for a long while; his career has spanned 35 years. He’s had some high up and very low down times in his life, but here he works with these DC area guys and shows why he was nominated for the 1990 WC Handy Best Blues Import award for his first release on JSP. His harp and vocals are greasy, low down and authentic roots music. Once can contrast the clean, cool sounds of Electrofied and the more guttural Live Perfromances; both are fun, but they are different styles. Greg Phillips and Clarence Turner back up Sayles and Fazio on the live CD.

I enjoyed both CDs. The rawness of Sayles and the smoothness of Taylor are striking contrasts, but that’s what makes life and music interesting. These guys are worth checking out.- Sayles and Fazio have many YouTube cuts you can sample and so do Electrofied. Electrofied CDs are available on their web site and on CD Baby. The Live CD appears to be available through their gigs; it’s not on Sayle’s web site. In any case, Tony Fazio and his efforts on these CDs are solid and it’s nice to see him working with both Charlie Sayles and his own band.
Posted by Crossroads Blues Society at 11:47 AM

Thanks for the wonderful review. Our CD was truly a labor of love for the blues..

Continued Success to you!

I enjoyed the CDs. Nice job on your vocals!

Really do appreciate the reviews!