Tell Me What You Say reviewed by Steve Jones 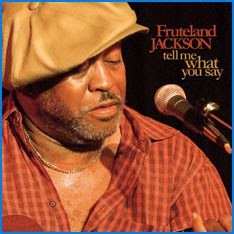 Fruteland Jackson is a long-standing friend of our Crossroads Blues Society. He has done many Blues In the Schools programs in the Rockford area and thousands of students and adults in our area have benefited from his programs. Frutelands’ music and blues education along with his talent have been something we have grown to appreciate and savor over the years.
His newest album on Electro-Fi Records features some great new songs and covers, ranging I topics from the sentimental to the hard hitting. From “Happy Birthday Blues” and “You Are My Sunshine” to “Blues Over Baghdad,” we have Fruteland running the gamut of emotions/ He is equally adept at fretting over birthdays (a recurring theme in his music) and covering traditional songs in new ways to lamenting over the war in Iraq. “War is not for those who are right, but for those who are left” is the profound closure to the latter song. He poignantly expresses his feelings over the war as no one else can.
In “The I.R.S.” he has blues over a tax audit, something we can all appreciate especially during our annual tax season. His new songs often describe the blues in the form current topics.
Fruteland’s approach to the blues is traditional yet he always makes his music sound fresh. The sonorous tenor voice with its’ wavering vibrato make any of his songs a joy to listen to. His vocals strongly evoke the sadness of the blues comes out in tunes like “My Baby Left Me All Alone in E Minor.” On the other end of the spectrum of emotion, he brings in the excitement a gambler experiences in “A Gambler’s View.”
Although Fruteland may not take kindly to his middle age, we sense a maturity in his work that evolves from where he is in his life. Frutelands’ newest CD is a great effort and it is worth more than one listen. If acoustic blues is your bag, then this is a CD for you.
Posted by Crossroads Blues Society at 8:35 PM