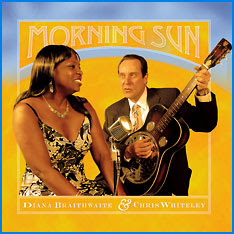 Here is a sparkling little gem of a release – all acoustic with original material throughout.Braithwaite is a vocalist with an extensive resume that includes time in Chicago. Whiteley is a multi-instrumentalist and singer from Canada who has played with legends like Blind John Davis and Lonnie Johnson. Each contributes five songs to the project and they co-wrote the other three tunes.
For inspiration, the duo looked to the records from Bluebird Records from the 1930’s and 40’s. The opening track, “Cold and Lonely Night”, has the pair trading the vocal with Whiteley on acoustic guitar laying down a steady groove with help from Al Cross, who uses brushes on the drums. On “Birds That Whistle”, Whiteley uses a National steel guitar to demonstrate his proficiency on slide guitar. Braithwaite's vocal range gets showcased on this track. Her voice has a lighter tone then the typical female singers belting out blues with deep, dark voices. But she doesn't have any trouble conveying the pain in her original piece, "No Longer Will I Roam". Whiteley adds some great, down-home harp playing in addition to his fine guitar work.
Another highlight is "Box Car Blues", a humorous look at the trials and tribulations of several shady characters in their quest to get right with the world. The track gets the full-band treatment with Whiteley blowin' a cornet while his brother, Jesse, adds his piano and Drew Jurecka contributes alto saxophone. This performance sounds like it was cut in New Orleans when Louis Armstrong and Jelly Roll Morton were kings. Whiteley gives his harp a workout on the country blues track "In My Garden". Through the magic of over-dubbing, he can also be heard on this cut on guitar, lead vocal and laying down a solid rhythm on the spoons!
The disc closes with the title track, a gentle folk-blues tune. Whiteley picks the melody on an acoustic guitar as Braithwaite's strong vocal hints at some gospel influences. It is a fitting end to a recording that is a refreshing change of pace from the seemingly endless onslaught of amped-up electric blues. Diana Braithwaite and Chris Whiteley obviously have a plenty of passion for the music of days gone by. But instead of simply recording their favorite old songs, they have taken the time to compose their own songs that capture the spirit of the by-gone era and then bring them to life with their spirited performances. This one is recommended for discriminating listeners.
Posted by Crossroads Blues Society at 8:30 PM