10 Days Out reviewed by Steve Jones 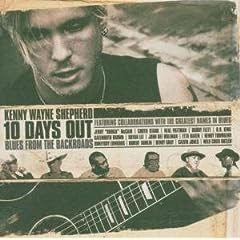 I’ve heard complaints and criticism about Kenny Wayne Shepherd over the past few years. His last CD was such a departure from the blues and almost seemed like a blatant (failed? attempt at crossing over to pop. But there is also Kenny Wayne Shepherd the blues man. I saw him perform with BB King in San Diego a few years ago and was totally impressed with his unassuming attack on and conquest of 12 bar blues. I was shaking my head in awe, and so was BB King. When I saw he was producing a CD and DVD from his 10 day tour in 2004 where he went to the places where the roots of the blues run deep to capture live performances, I thought that this just might amount to something important. The CD/DVD set is more than something– it is a wonderful musical documentary that make us yearn for even more. Kenny and the boys from Double Trouble take a backseat to showcase a number of great bluesmen and women and have produced a smash hit. Kudos to Kenny for his superb effort.

The CD opens with Cootie Stark and Big Daddy Pattman, with Kenny in support of these lesser known but amazing artists from Tim Duffy’s Music Maker Foundation. Kenny is on their Board and is a major contributor to Music Maker. The train chugging harp sounds and strumming of some beautiful acoustic blues on the first track “Prison Blues” just whets the appetite for more, and Kenny delivers with almost 78 minutes of fine blues. The DVD repeats all but one of the songs and adds Pinetop Perkins with Kenny and the Muddy Waters Band performing “Got My Mojo Working.”

BB King is youthfully captured performing his standard “The Thill is Gone” with Kenny at BB’s annual Indianola MS Homecoming Festival. Hubert Sumlin, Henry Gray and Wild Child Butler lead the Howling Wolf Band with Kenny playing some wicked licks. Bryan Lee’s “Tina Marie” is a New Orleans staple and he and Kenny give the song a great cover. Gatemouth Brown give a classic performance on “Born in Louisiana;” it features Kenny, Double Trouble and some great fiddle work by Jimmy Wallace. John Dee Holeman, Etta Baker and Henry Townsend and Kenny turn out three of my favorite tracks from the set. Kenny respectfully plays along with these guitar pickers, turning in some truly good stuff.

Barnes and Noble also offered a 2 track bonus CD with Kenney and Buddy Flett and then Gatemouth, making this set even better. Get it. You will not regret it– it is one of the year’s best!
Posted by Crossroads Blues Society at 9:00 PM