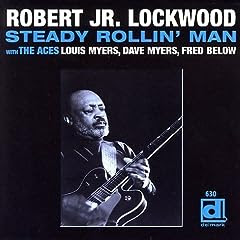 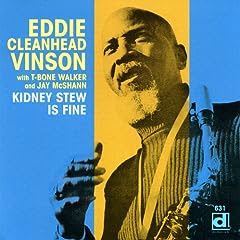 These discs are cd reissues of classic material by two giants of the Blues world. The Lockwood disc was his first recording as a leader after years as the first-call studio guitar player in Chicago. His is backed by the Aces - Louis Myers on guitar, Dave Myers on bass and Fred Below on drums. During the 1950's, the Aces were the band on the Chicago scene, backing a young Junior Wells and the legendary Little Walter.
The disc features ten tunes that Lockwood wrote, many of which remained in his repertoire for the rest of his career, like the title track, "Mean Red Spider", "Take a Little Walk with Me", and "Ramblin' on My Mind". Robert Jr. handles the vocals in his distinctive high-pitched voice. The Aces provide solid support with Louis and Lockwood sharing the guitar spotlight. The session never scales the heights of emotional intensity but on tracks like "Blues and Trouble", the interplay between the members achieves exactly what the title promises. This is a fine historical document of Robert Jr. at the start of his own career and gets extra points for including the Aces.
"Cleanhead" Vinson has been one of my favorites for a long time. His vocal style came from the "blues shouter" school. Vinson was also a fine alto sax player who easily mixed blues and jazz for his instantly recognizable sound. His 1969 session is a true gathering of giants as he is joined by T-Bone Walker on guitar, Hal Singer on tenor sax and the great Jay McShann on piano. The disc is a treat from start to finish, with Cleanhead in great spirits, singing with plenty of energy and the sly humor that found a place in much of his work . The introduction to "Juice Head Baby" quickly shows that Vinson was an accomplished alto player.
Several other Vinson compositions are included, tunes he would return to many times like the title cut, "Wait a Minute Baby", and "Old Maid Boogie". He also covers two Big Bill Broonzy songs. "Somebody Sure Has Got To Go" opens the disc with a tale of two-timing love and includes a fine McShann solo. The other Broonzy tune, "Just A Dream", finds Cleanhead slowing the pace as he ponders the possibility of a better world.
This session swings from start to finish. Walker and McShann provide stellar accompaniment throughout the disc. Vinson proves the the years had not robbed him of his talents, singing and playing with his usual high level of exuberance. If you have never checked out the work of Eddie Vinson, this recording is an outstanding starting point. But advised, you may find Mr. Cleanhead to be very addictive !!!
Posted by Crossroads Blues Society at 9:16 PM