My Blues reviewed by Mark Thompson 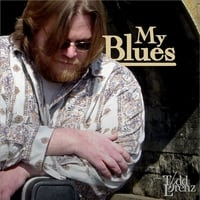 Todd hails from Monroe, WI and sent me an e-mail asking if he could submit one of his recordings for a review. He has recently started performing live again and one of his first shows was in Rockford.


This disc is a selection of the best blues material from Todd’s first three discs. All of the cuts were written by Todd, who handles the vocals and lays down a steady stream of fine slide guitar on this solo effort. These versions were recently recorded to give listeners a more current, accurate indication of Todd’s talent and ability.

A solo recording doesn’t leave an artist anywhere to hide, especially when you are working with original material. Lorenz is able to make it work with ease. His slide guitar creates a solid rhythmic foundation throughout the disc, especially on tracks like “Hush Hush” where his rapid-fire licks add to the intensity of the performance. He has good range on the vocals and varies his approach enough to maintain interest.

The same could be said for Todd’s songwriting. He mixes standard blues licks with lyrics that often provide a humorous view of real life situations.
This quality is very evident on “Got Her Gone”, where the woman lays down a list of laws which Todd promptly uses as a roadmap to bring the relationship to an end. One has to wonder about his emotional state of being when he wrote “Even My Shoes Got the Blues”.

I listened to this recording on two long business road-trips. It held my attention both times. The best praise I can give My Blues is that, after hearing the disc, I want to see a live performance by Lorenz. We will all have a chance to do just that when Todd appears at Border’s Books in Rockford on Friday, July 6, starting at 8 p.m. Or go to his website and listen to some samples to see what you think.
Posted by Crossroads Blues Society at 9:06 PM