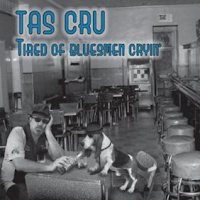 At the age of nine, Tas Cru was exposed to the blues style of Howlin' Wolf through his uncle and father who had a strong interest for the blues legend and his unique vocals. He also listened to other bluesmen like Albert Collins, who to him was one of the best blues artists at phrasing.  Tas is quoted as saying, "many musicians have an electrifying guitar stage presence, but an important part of what makes a great artist is their unique way of phrasing and Albert Collins was one of the best at phrasing."
His latest release Tired of Bluesmen Cryin' was inspired from a statement made by a student who had attended one of the Blues In The Schools programs Tas had given. She said she was tired of bluesmen singing about what they had lost and that some of them probably deserved it. Impressed that a young student made such a significant observation, he decided to write the song as the title track of his new CD.

The CD opens the title track "Tired of Bluesmen Cryin'," with Tas playing slide on his homemade Tejano Cigar Box guitar that he uses as a significant part of his live performances. With strong vocals paralleled to those of Jimmy Thackery, Tas changes guitars to a resonator on the slow, soulful tune "Changin' My Ways." He changes once again to deliver this time the slow love song "One More Time", with smooth guitar solos. The tempo picks up on "Road To Obsession" with a fiery guitar style and funky bass line. "Try, Oh I Try" is another slow blues tune about the sweet temptations of life on the road. The slide guitar and organ dominate the tune "That Lovin' Thang." According to Tas, he hears every word his baby says as heard in the original track "Every Word You Say." "Sure Do (want to fool around)" assures us he will be nobody's fool. He enlists the fine slide guitar of sideman Jeremy Walz, along with a smooth acoustic guitar groove throughout the original song "Storytime." "Heal My Misery" would be a good theme song for a travelin' bluesman and his trials and tribulations of life on the road. On the serious side, Tas pays tribute to the soldiers and families of the US Army's 10th Mountain Division in the final melancholy song "Dark Side Of The Mountain."

Tas Cru is quite the story teller as heard in his latest release Tired of Bluesmen Cryin'. The 11 original tunes are well written and the musicality is superb! You owe it to yourself add this CD to your collection.

Posted by Crossroads Blues Society at 3:39 AM