The Road To Mississippi reviewed by Harmonica Joe 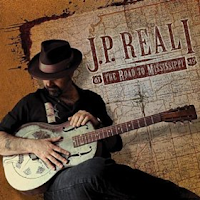 J.P. Reali is an outstanding example of a very talented resonator slide guitar blues artist.  For over 30 years he has shaped and nurtured his music while playing several genres of music. During this period he also developed his vocal skill as well as a strong lyric writing ability. He has won several music honors over the years also. He was the winner of the DC Blues Society’s Battle of the Bands category in both 2010 and 2011. “The Road To Mississippi” is Reali’s third blues album to be released. All of the tracks on the CD were written by J.P. except for “Jefferson Lament” penned by Chris Reali and “The Book Or The Bottle” by J.P. and Chris. All of these songs have good lyrics in them. Joining Reali on this recording are Pete Regusa playing drums on 2 tracks, John Previtti on upright bass on 1 track and Mark Wenner (Nighthawks) playing harp on 4 tracks. Other than these musicians Realli does a fine job as a solo blues artist for the rest of the CD.

“Jefferson Lament” quickly lets us know that we are about to hear some serious country acoustic blues. Realli gives us a large dose of powerful resonator guitar playing as he does a great job on vocals while adding a thought provoking field holler for the lyrics. There is some swell call and response with the vocals and guitar here. “Time to get your boots on, it’s time for work” starts the tale of the workers enduring tough times in the fields. J.P. seems to bring this tale to life for us as he performs.  Chris Realli did a fine job writing this tune.  It is refreshing to hear someone play the really old style acoustic blues as well and heartfelt as well as J.P. Realli does. This style of playing seems to be a dying form of the blues. We should not be willing to let it be hidden away or just disappear. This is where the blues came from.

Besides the serious blues that Reali takes us to, there is also a lighter side of the blues from him. With tune such as “Biscuit Baking Mama”, featuring Mark Wenner on harp, and “Cold Steel Blues” we are in a happier place of blues. These tunes definitely show a good, free and loose side of Reali’s music style. You may want to take time to listen both his finger picking and slide work on the resonator guitar. This is some really good stuff.

“The Road To Mississippi” is easy to listen to, memorable and grabs at our senses as to what the blues are all about.  Except for the fact that the opening and closing instrumentals are just a short tease of J.P.’s guitar playing and should have great stand alone tracks on the CD, there is nothing bad about “The Road To Mississippi.” Being only about 36 minutes in length we are left hanging wanting more J.P Reali’s blues.

Posted by Crossroads Blues Society at 3:50 AM